The Narcotic Farm: The Rise and Fall of America's First Prison for Drug Addicts (Hardcover) 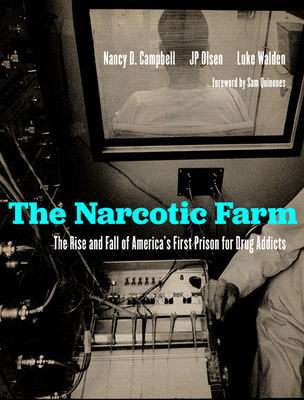 The Narcotic Farm: The Rise and Fall of America's First Prison for Drug Addicts (Hardcover)

The United States Narcotic Farm opened in 1935 in the rolling hills of Kentucky horse country. Portrayed in the press as everything from a "New Deal for the drug addict" to a "million-dollar flophouse for junkies," the sprawling art deco facility was equal parts federal prison, treatment center, working farm, and research laboratory. Its mission was to rehabilitate addicts, who were increasingly criminalized and incarcerated as a result of strict new drug laws, and to discover a cure for opiate addiction.

This richly illustrated book offers an important history of this progressive yet ultimately doomed experiment. "Narco," as the locals called it, pioneered new treatments such as prescribing methadone to manage heroin withdrawal and developed drugs that blocked the action of opiates. The coed institution admitted federal prisoners as well as volunteers who checked themselves in for treatment, and through the years it hosted several legendary jazz musicians, including Chet Baker and Sonny Rollins, as well as actor Peter Lorre and writer William S. Burroughs. The facility ultimately closed in 1975 under a cloud as Congress learned that Narco researchers had recruited patients as test subjects for CIA-funded LSD experiments from 1953 to 1962, part of the notorious project MK-Ultra.

Featuring a new foreword by Sam Quinones, The Narcotic Farm offers a vital perspective on US drug policy, addiction, and incarceration as the nation struggles with a new opioid epidemic.

Nancy D. Campbell, professor of science and technology studies at Rensselaer Polytechnic Institute in Troy, New York, is a historian and author of OD: Naloxone and the Politics of Overdose. JP Olsen is a documentary filmmaker, writer, and composer, director of original programming at HBO, and a teacher of journalism at Columbia University. He lives in Brooklyn, New York. Luke Walden is assistant professor of communication arts at Mitchell College in New London, Connecticut, and a documentary filmmaker. He lives in Providence, Rhode Island.