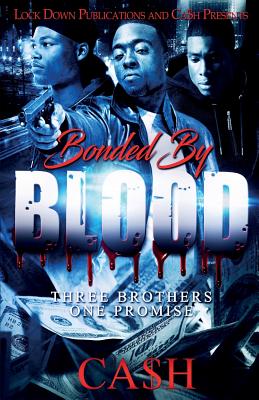 From her deathbed, where HIV is choking away her last breaths, Black Girl, an infamous ex-prostitute of Atlanta's Auburn Avenue ho stroll, exacts two promises from her three young teenaged sons, Khalil, B-Man, and Quantavious. She does not try to fool herself that the boys will be anything but hustlers. Hustlin' is in their blood from both ends -- hers and their father Raphael's, who was Black Girl's pimp before drugs knocked them both on their asses and destroyed Raphael's stable of top-notch ho's. In Khalil, Black Girl sees the making of a boss mack, much like his pops. In B-Man, her youngest son, she sees a fierce jackboy and a heartless killa. In her baby boy, Quantavious, Black Girl prophesizes a major drug kingpin. Together, she knows her sons can rule the streets from all angles. But to do so, they must never let money, women, jealousy or greed come between them. They must remain BONDED BY BLOOD, which she makes them promise at her deathbed. Black Girl also makes her boys promise to forgive Raphael, and not hold her demise against him. But some promises are hard to keep, especially when bitterness runs deep. When fast money, irresistible women, unspoken grudges and unforgivable violations are tossed into the mix, will a deathbed promise to their mother be enough to stop the bloodshed once it begins? Which brother will remain standing in the end?