Electric Brain: How the New Science of Brainwaves Reads Minds, Tells Us How We Learn, and Helps Us Change for the Better (Hardcover) 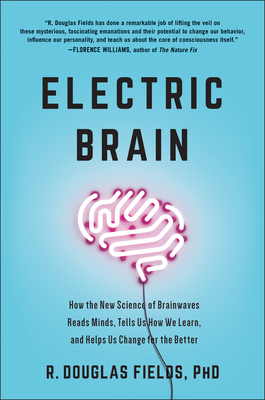 Electric Brain: How the New Science of Brainwaves Reads Minds, Tells Us How We Learn, and Helps Us Change for the Better (Hardcover)

What is as unique as your fingerprints and more revealing than your diary? Hint: Your body is emitting them right now and has been every single day of your life.

Analyzing brainwaves, the imperceptible waves of electricity surging across your scalp, has been possible for nearly a century. But only now are neuroscientists becoming aware of the wealth of information brainwaves hold about a person's life, thoughts, and future health.

From the moment a reclusive German doctor discovered waves of electricity radiating from the heads of his patients in the 1920s, brainwaves have sparked astonishment and intrigue, yet the significance of the discovery and its momentous implications have been poorly understood. Now, it is clear that these silent broadcasts can actually reveal a stunning wealth of information about any one of us.

In Electric Brain, world-renowned neuroscientist and author R. Douglas Fields takes us on an enthralling journey into the world of brainwaves, detailing how new brain science could fundamentally change society, separating fact from hyperbole along the way.

In this eye-opening and in-depth look at the most recent findings in brain science, Fields explores groundbreaking research that shows brainwaves can:

• Reveal the type of brain you have—its strengths and weaknesses and your aptitude for learning different types of information
• Allow scientists to watch your brain learn, glean your intelligence, and even tell how adventurous you are
• Expose hidden dysfunctions—including signifiers of mental illness and neurological disorders
• Render your thoughts and transmit them to machines and back from machines into your brain
• Meld minds by telepathically transmitting information from one brain to another
• Enable individuals to rewire their own brains and improve cognitive performance


Written by one of the neuroscientists on the cutting edge of brainwave research, Electric Brain tells a fascinating and obscure story of discovery, explains the latest science, and looks to the future—and the exciting possibilities in store for medicine, technology, and our understanding of ourselves.
R. Douglas Fields, PhD, is a neuroscientist, an international authority on nervous system development and plasticity, and an American Association for the Advancement of Science Fellow. He received advanced degrees from UC Berkeley, San Jose State University, and UC San Diego, and he held postdoctoral fellowships at Stanford and Yale universities before joining the National Institutes of Health, in Bethesda, Maryland. Fields is also an adjunct professor at the Neuroscience and Cognitive Science Program at the University of Maryland, College Park. He has published over 150 articles in scientific journals and books from his experimental research into how the brain is modified by experience, and the cellular mechanisms of memory. His scientific research has been featured internationally in newspapers, magazines, radio, and television, including the National Geographic, ABC News Nightline, and NPR Morning Edition. His research on nervous system plasticity involving non-neuronal cells (glia) in white matter regions of the brain, is recognized as pioneering a new non-synaptic mechanism of nervous system plasticity. In 2004, he founded the scientific journal Neuron Glia Biology, to advance research on interactions between neurons and glia, and he serves on the editorial boards of several neuroscience journals.

In addition to his scientific research, Fields is also the author of numerous books and magazine articles about the brain for the general reader, including The Other Brain, about brain cells that communicate without using electricity (glia), and Why We Snap, about the neuroscience of sudden aggression, as well as numerous articles in popular magazines including Outside Magazine, The Washington Post Magazine, Scientific American and Scientific American Mind, Time, Undark, Quanta, and on-line columns for The Huffington Post, Psychology Today, Scientific American, the Society for Neuroscience, BrainFacts, and others.

“The Electric Brain tells the story behind one of the most basic and important features of the nervous system—its electrical properties. Forget the hype you've heard about ‘brain waves.’ Read R. Douglas Fields’s facile account of the role of brain electrical activity in mind and behavior.”

—Joseph LeDoux, author of The Deep History of Ourselves: The Four-Billion-Year-Story of How We Got Conscious Brains

“Brainwaves, not heartbeat, determine the threshold between life and death. They can control drones and in turn be controlled by machines. R. Douglas Fields has done a remarkable job of lifting the veil on these mysterious, fascinating emanations and their potential to change our behavior, influence our personality, and teach us about the core of consciousness itself.”

“A lively personal account of the wild west of brain wave research, opening multiple windows to deep mysteries underlying our conscious and unconscious selves. Lucid discussions of dreams, mental disorders, mind control, and more provide the reader with a vibrant look into brain science and its impacts on our lives. Strongly recommended.”

—Paul L. Nunez PhD, neuroscientist and author of The New Science of Consciousness: Exploring the Complexity of Brain, Mind, and Self

“R. Douglas Fields explains how electricity is exploited in neuronal circuits for both simple and complex functions. He does it in an accessible language, embedded in a beautiful prose where beyond discussing fascinating scientific topics of brain works, the scientists come to the fore. A great book to everyone interested in the most complex matter that exists.”

—György Buzsáki, author of Rhythms of the Brain and The Brain from Inside Out