Romance of the Rails: Why the Passenger Trains We Love Are Not the Transportation We Need (Hardcover) 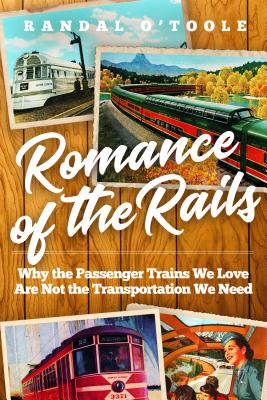 Romance of the Rails: Why the Passenger Trains We Love Are Not the Transportation We Need (Hardcover)


Title unavailable, please email for information.
American transportation has undergone many technological revolutions: from sailing ships to steam ships; from canals to railroads; from steam to Diesels; from horse cars to electric streetcars; from passenger trains and urban rail transit to airplanes and automobiles. Normally, the government has allowed and even encouraged these revolutions, but for some reason the federal government is spending billions of dollars trying to preserve and build obsolete rail transit and passenger train lines, including high-speed trains that cost more but are less than half as fast as flying. In Romance of the Rails, rail fan and transportation policy expert Randal O'Toole asks why passenger trains have been singled out and whether this policy makes sense. To answer this question, the book looks at the history of both intercity and urban rail transportation going back to 1825. The Golden Age of rail passenger travel, from about 1890 to 1920, depended on job and population concentrations that no longer exist today. Moreover, even during that Golden Age, most rail travel was confined to the elites, while a majority of Americans rarely if ever rode a streetcar or intercity train. Federally subsidized efforts to return to that Golden Age, through subsidies to Amtrak and local transit agencies, are doing more harm than good to personal mobility. Instead, the transportation of the future will rely on America's 4 million miles of roads and air travel that requires minimal infrastructure.
Randal O'Toole is a Cato Institute Senior Fellow working on urban growth, public land, and transportation issues.