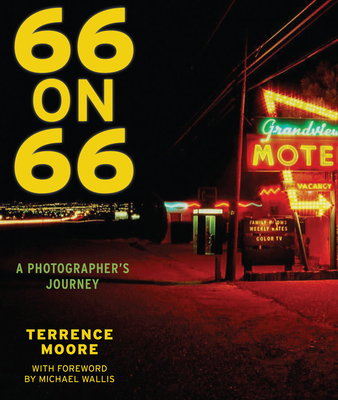 By Terrence Moore (By (photographer)), Michael Wallis (Foreword by)
$27.95
Available to Order - Usually Arrives in Our Store in 4 to 7 Days

As the highway that opened up the West to millions of travelers since its construction in the 1930s, Rte. 66 is an iconic road that has been celebrated in story, song, films, and more. Justly known as "The Mother Road," this highway became the vital path for travelers, tourists, and fortune-seekers. However, after the advent of the superhighway and the Interstate system of the 1950s, Rte. 66 gradually fell out of use, leaving behind fascinating relics of a bygone era—roadside attractions, marvelous kitsch, storefronts, and the great neon artifacts that still light up the night along the highway. Terrence Moore has traveled and photographed this road since he first drove it with his parents in the 1960s. Though he has covered this subject for more than 40 years as a professional photographer, never before has his work been collected in book form. This volume highlights 66 of his finest 35mm color film images—a stunning chronicle of this storied road in states from Missouri to California.

Terrence Moore is a renowned photographer whose work has appeared in Smithsonian, the New York Times Magazine, and elsewhere. Michael Wallis is Pulitzer- and National Book Award-nominated chronicler of the West and American history whose 18 books include Route 66: The Mother Road and The Best Land Under Heaven: The Donner Party in the Age of Manifest Destiny. He is the recipient of the John Steinbeck Award and the Will Rogers Spirit Award.

"Moore’s 66 on 66: A Photographer’s Journey is more than pretty and well-composed photographs. Because he’s been taking photos along Route 66 since the early 1970s, that gives the book much historical heft." —Ron Warnick, Route 66 Newswww.route66news.com

"Moore’s four-decades-in-the-making collection of photos of Route 66 is a beautiful and fitting tribute to the highway and to a vanished way of life." —Kristine Morris, Foreword Reviews

Article on 66 On 66 —The Larchmont Chronicle

Q & A with Terrence Moore about 66 On 66. —Interview, Arizona Highways

66 On 66 makes #4 on the Oklahoma nonfiction best-sellers list. —Tulsa World