Trial by Fire: One Man's Battle to End Corporate Greed and Save Lives (Hardcover) 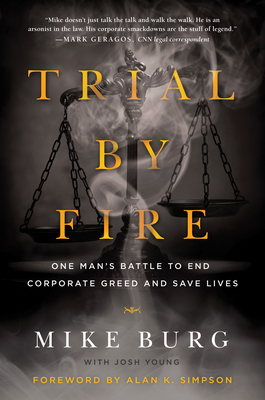 In the face of corporate bullies, one lawyer's passion and persistence paid off. Bullied as a Jewish kid in the hardscrabble neighborhoods of Chicago, Mike Burg had to learn how to fight at a young age. As an adult who started his own law firm from scratch that fire--and understanding of the underdog--still burns and makes him one of America's top trial lawyers fighting for consumers' rights. In Trial by Fire: One Man's Battle to End Corporate Greed and Save Lives, read about Burg's unwavering personal constitution to stand up for the weary, the weak, and the downtrodden at all costs. Follow the justice as he takes on a negligent gas company and wins not only financial settlement for victims but dramatic changes to a city's pipelines to save thousands of lives. Cheer him on as he leads hundreds of individuals against companies shilling drugs such as Fen-Phen, Yaz, Zyprexa, and Pradaxa. Empathize with him as he fights an eight-year battle against UBS Warburg for knowingly selling risky mortgages to investors before collecting compensation. Root him on as he files a sweeping action against 28 California wineries to force them to stop selling toxic wine contaminated with arsenic. Representing everyone from the Little Rascals to Ralph Tamm in the first NFL steroid case, Burg has lived a thousand lives. Trial by Fire shows that, like with every victory in the courtroom, he doubles down for the next adventure. Performing stand-up comedy alongside Roseanne Barr, golfing with Michael Jordan, and attending President George W. Bush's inauguration with President Bush's father, Burg has a story to tell. His undeniably explosive personality and inspiring tale--complete with theatrics, eccentricities, excitement, humor, and maybe just a hint of craziness--will make you laugh, leave you in disbelief, and, most of all, inspire you.

Since being admitted to the practice of law in 1976, Mike Burg has enjoyed a highly successful career that clearly places him at the pinnacle of the legal profession. He is an outstanding trial attorney who has dedicated his life to fighting for the underdog, and to protecting the rights of Americans to a trial by jury. Mike is the recipient of numerous legal awards, including the Clarence Darrow Award, the American Association for Justice Heavy Lifting Award, and the Weidemann Wysocki Award. He was also named one of the Top 50 Trial Attorneys in America by the Legal 500 from 2012 through 2015, and was named Lawyer of the Year in Products Liability by Best Lawyers in America in 2015. Additionally, Law Week Colorado named Mike the Lawyer of the Decade from 2000-2010. He is Past President of the National Trial Lawyers (2010). Mike has been appointed to numerous leadership positions by Federal Judges around the country in a variety of high-profile Multi District Litigations, including being co-lead attorney in the Ortho Evra and Yaz/Yasmin litigations, which resulted in settlements of over $3 Billion dollars. He continues to actively practice law in the areas of catastrophic personal injury and commercial litigation and has won numerous verdicts for his clients, over twenty of which have been in excess of $1M. Josh Young is a bestselling author whose works span entertainment, business, politics, science and natural history. He has coauthored five New York Times bestsellers and two national bestsellers. He is the coauthor of comedian Howie Mandel's Here's The Deal: Don't Touch Me, You're Only As Good As Your Next One with Mike Medavoy, Dr. Sam Parnia's Erasing Death: The Science That Is Rewriting The Boundaries Between Life And Death, and The Link: Uncovering Our Oldest Ancestor with Colin Tudge, which has been translated into five languages. Additionally, he is the coauthor of Pure Imagination: The Making of 'Willy Wonka and the Chocolate Factory' and David Attenborough's First Life: A Journey Back in Time with Matt Kaplan. On the film side, Josh served as Production Consultant on White House Down (June 2013). As a journalist, Josh has contributed to George magazine, Entertainment Weekly, LIFE magazine, The New York Times Sunday, The New Republic, Details, The (London) Sunday Telegraph, and Los Angeles.