A Strange Hymn (The Bargainer) (Paperback) 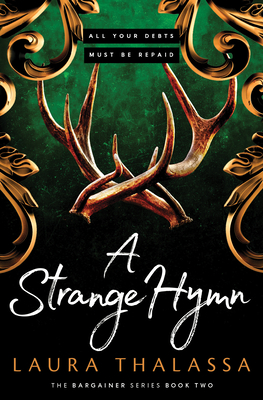 A Strange Hymn (The Bargainer) (Paperback)

From bestselling indie author Laura Thalassa comes the newly revised and edited second book in her smash-hit dark fantasy romance between a siren and the "bargainer" she owes countless favors to.

She survived the mad king…but the nightmare isn't over.

Siren Callypso Lillis still wears the physical reminders of her time as Karnon's captive, even after reuniting with soulmate Desmond Flynn, the King of Night. Not only that, but mounting evidence suggests the Thief of Souls, the being responsible for the disappearance of countless fae warriors, is still out there.

Invited to an annual Solstice celebration, Callie and Des journey to the Kingdom of Flora to continue their investigation. But under the bright lights and striking blooms of the realm, new complications arise, ones that no amount of bargaining can undo. Soldiers begin to go missing from the gathering, and some of the fae begin to suspect Des is the man behind it all. To Callie, one thing is certain: no one is who they appear to be. Not even her soulmate.

Fairies play dangerous games. Some want love, some want vengeance, some want flesh, and some want horrors too unspeakable to name. Something is stirring in the Land of All that Grows, and if Callie isn't careful, it will claim everything she loves—and her along with it.

Laura Thalassa is the author of over a dozen paranormal and fantasy romance novels. She fell in love with stories as a child and decided she never wanted to escape them. She lives in sunny southern California with her husband and children. When not writing, she can be found reading about lost civilizations, splashing with her kids in the Pacific, and hoarding chocolate for the apocalypse.