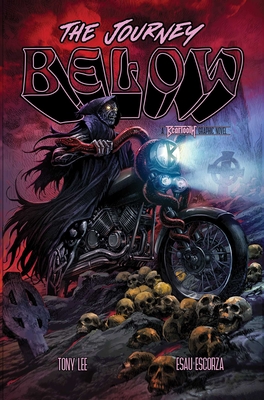 The story behind the myths of Beartooth’s album 'Below' is brought to life as Barry awakens corporate drone Lita’s memory of how alive the world once was before the cold forces of the corporate world outlawed rock, reminding her of who she truly was, and who she could be again. Told by #1 New York Times best-selling author Tony Lee with the members of Beartooth, The Journey Below is a powerful tale reminding us of the vital power contained within every chord and beat of a song.
-A multiple-time New York Times Best-seller List and Eagle Award winning Writer, Tony Lee has worked professionally for over thirty years, including a decade in trade journalism and media marketing/creation for radio. Since returning to comics in 2003 he has written for Marvel Comics, DC Comics, Dynamite Entertainment, Titan Publishing, Markosia, 2000ad and IDW Publishing amongst others, writing a variety of creator owned titles and licenses that include X-Men, Spider Man, Star Trek, Battlestar Galactica, Doctor Who, Superboy, Starship Troopers, Wallace & Gromit and Shrek.