Not Our Day to Die: Testimony from the Guatemalan Jungle (Paperback) 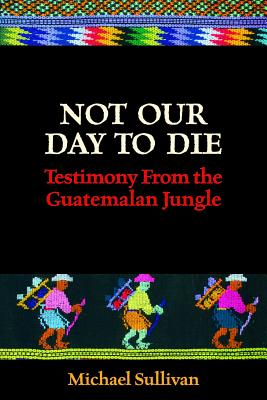 By Michael Sullivan
$19.95
Available to Order - Usually Arrives in Our Store in 4 to 7 Days

It was work for Mike Sullivan-a flying job like the ones he'd done most of his life in many parts of the world-ferrying people, medicine, crops, supplies and almost anything else you can think of among the isolated jungle villages of Guatemala. Life in the farming co-ops there was simple, peaceful, and good, based on bedrocks of family, community, and faith. Then the repression began. A failed attempt at a coup had led to continued fighting between rebels and government, though in areas far from the almost-utopian Ixcan region. U.S. military and CIA intervention helped defeat the insurgency, but the social inequalities that had led to the movement remained, and the revolution went underground. The Guatemalan army, searching everywhere for those who opposed it, increased its control over the isolated jungle area. Co-op directors, teachers, catechists, and then anyone suspected of being one of or assisting the guerrillas was selectively "disappeared." The army turned to a scorched-earth policy, killing animals, burning crops, uprooting fruit trees, destroying towns, massacring their people. Throughout the Ixcan, those who survived fled. Some returned to their original mountain villages, others crossed the border into Mexico, and a third group survived for sixteen years hiding in the jungle-men, women, and children. Primeval growth took over the land as the war with the guerrilla movement raged on to encompass the entire nation. When finally peace accords were signed, the people of the Ixcan returned. Homes were rebuilt, land reclaimed, the area thrived again. But sixteen years were lost, along with countless lives. For Mike Sullivan, who had returned there when his help was needed, the story of those years-of how the people of the Ixcan survived, and of the many who didn't-was one that had to be told. In three visits, he conducted the interviews that form this book, talking with the villagers he'd known long before. At first, they spoke hesitantly, then with the flood force of vivid memory, telling of their first arrival at the Ixcan, the lives they'd made, and the years of the repression and worse. Their stories are gripping, fascinating, painful-but most of all, deeply human as we witness their struggle to survive and feel the force of the simple values that ultimately carried them through to a new and better life.