Pioneers of the Game: The Evolution of Men’s Professional Tennis (Paperback) 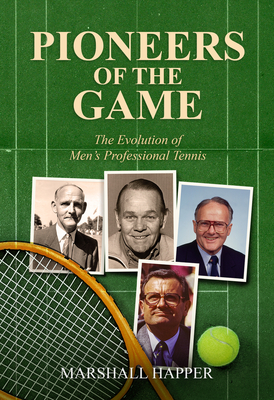 Pioneers of the Game: The Evolution of Men’s Professional Tennis (Paperback)


Email or call for price. Handling fee may apply.
The saga and history of the inside struggles and conflicts of a surprisingly small group of international visionaries and activists who shaped the business, administration, and governance of men’s professional tennis from 1919 to 1990 and beyond is told in Pioneers of the Game. The book documents the pioneer’s 40-year competition between amateur and professional tennis which eventually forced the approval of Open Tennis in 1968, followed by the creation and development of the business, administration, and governance of men’s tennis as a professional sport between 1968 and1990 and beyond, with the divided governance and the advent of the ATP Tour. The author is Marshall Happer, who was the first and only “commissioner” of men’s professional tennis as the head of the Men's Tennis Council, the first and last unified governing body of men’s tennis from 1974-1989. This historical volume profiles, honors, and ranks these administrative legends which include Jack Kramer, Phillippe Chatrier, Lamar Hunt, Herman David, Derek Hardwick, Robert Kelleher, Donald Dell, Mike Davies, Stan Malless, Tony Trabert, Arthur Ashe, and Cliff Drysdale, among others.
Marshall Happer was one of the most influential leaders in professional tennis serving as Chief Operating Officer (“Commissioner”) from 1981-1989 for the Men’s Tennis Council, the first and last unified governing body of men's international tennis worldwide and as Executive Director and Chief Operating Officer for the U.S. Tennis Association from 1990 to 1995. A native of Kinston, North Carolina and a graduate of the University of North Carolina at Chapel Hill School of Law, Happer practiced law in Raleigh, N.C. for many years prior to and after his MTC and USTA careers. Marshall Happer is the former head of the Men's International Professional Tennis Council.
“I was opposed to many of the rules that Marshall held us to and we fought all the time, but looking back he had an impossible job which he tried to manage in the fairest way possible” —Ivan Lendl, Three-time U.S. Open champion and former world No. 1

"Marshall Happer’s meticulously researched and erudite book – for the very first time – spells out the bloody, bruising and lawsuit filled dawn of the modern tennis era. With more twists and turns than a John Le Carre novel – no one’s tennis library is complete without Happer’s Pioneers of the Game.” —David Hill, Former Chairman and CEO, Fox Sports Media Group