River of Lost Souls: The Science, Politics, and Greed Behind the Gold King Mine Disaster (Paperback) 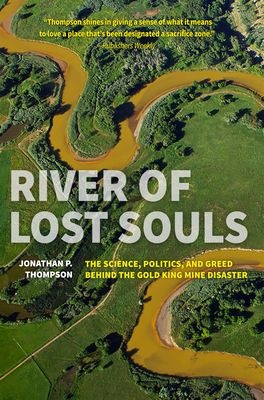 "Thompson, a southwestern Colorado native, knowledgeably and sensitively addresses ethical questions at the heart of his inquiry, including what it would mean to restore the water system to its precolonial state. He effortlessly explains the technical elements of this story, such as the complex chemistry of the environmental effects of mining. This is a vivid historical account of the Animas region, and Thompson shines in giving a sense of what it means to love a place that's been designated a 'sacrifice zone.'" ​

"An elegy of sorts for a beloved natural area with a long history of human exploitation." ​
--FOREWORD REVIEWS ​
​
"The reader will revel in the beauty of the Colorado landscape while recoiling from descriptions of cruelty towards the Native Americans and the horrors of acid mine drainage." ​
-- BOOKLIST ​​

"Thompson's writing meanders through Western history, family stories, and pollution-causing activities to create a vivid and, at times, horrifying time line that shows the aftereffects of human exploitation of nature... Aficionados of Western history, environmentalists, and even general readers will enjoy this cautionary tale that takes an intimate look at the side effects of human industry." ​
-- LIBRARY JOURNAL

"Thompson documents the sacrifice of the entire area with unusual detail, vibrancy, and no small amount of passion, and with a keen eye for the effects on people and other living things. Highly recommended." ​
--CHOICE ​

"By turns mournful, optimistic, angry and hilarious, Thompson offers fresh takes on everything from a mountain town's bare knuckle politics to a young man's loss of innocence to what it truly means to be a Westerner. Deeply researched, thoroughly unsentimental, this is a moving and rip-roaringly told tale." ​
--STEVE FRIEDMAN, author of Lost on Treasure Island and Driving Lessons ​ ​

Award-winning investigative environmental journalist Jonathan P. Thompson digs into the science, politics, and greed behind the 2015 Gold King Mine disaster, and unearths a litany of impacts wrought by a century and a half of mining, energy development, and fracking in southwestern Colorado. Amid these harsh realities, Thompson explores how a new generation is setting out to make amends.

As shocking and heartbreaking as the Gold King spill and its aftermath may be, it's merely the tip of the proverbial iceberg. The disaster itself was the climax of the long and troubled story of the Gold King mine, staked by a Swedish immigrant back in 1887. And it was only the most visible manifestation of a slow-moving, multi-faceted environmental catastrophe that had been unfolding here long before the events of August 5, 2015.

Jonathan Thompson is a native Westerner with deep roots in southwestern Colorado. He has been an environmental journalist focusing on the American West since he signed on as reporter and photographer at the Silverton Standard & the Miner newspaper in 1996. He has worked and written for High Country News for over a decade, serving as editor-in-chief from 2007 to 2010. He was a Ted Scripps fellow in environmental journalism at the University of Colorado in Boulder, and in 2016 he was awarded the Society of Environmental Journalists' Outstanding Beat Reporting, Small Market. He currently lives in Bulgaria with his wife Wendy and daughters Lydia and Elena.

Jonathan Thompson has been an environmental journalist focusing on the American West since he signed on as reporter and photographer at the Silverton Standard & the Miner newspaper in 1996. He has worked and written for High Country News for over a decade. He currently lives in Bulgaria with his wife Wendy and daughters Lydia and Elena.