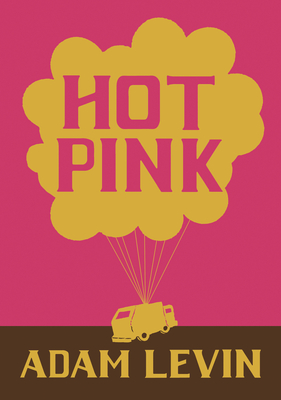 Adam Levin is the author of The Instructions, the winner of the New York Public Library's Young Lions Award. His stories have appeared in Tin House, McSweeney's, and Esquire. Winner of the 2003 Summer Literary Seminars Fiction Contest and the 2004 Joyce Carol Oates Fiction Prize, he lives in Chicago, where he teaches Creative Writing at the School of the Art Institute.

The Millions' and Flavorwire's most anticipated books of 2012.

Adam Levin’s new story collection, 'Hot Pink,' is about how lovefamily love, romantic love, love between friendsturns us into people we never thought we’d become. Today you’re one person, tomorrowenter love, and all bets are off. You could turn out to be anybody... Levin is especially adept at capturing the way we sometimes change against our will... In addition to love and lust, there’s plenty of havoc in these stories... there’s an exuberance here that is absent from safer and too often soulless collections... Life in 'Hot Pink' is raw, messy, yet replete with moments of awkward grace.”
The New York Times Book Review

"Readers put off by the enormity of Levin's debut novel, The Instructions (which clocks in at over 1,000 pages), can rest easythis hilarious, tenderly wrought story collection dazzles without the commitment. In the hands of a lesser writer, Levin's vaudevillian cast of characters--like the legless lesbian prodigy of "Considering the Bittersweet End of Susan Falls" or the titular young woman of 'Jane Tell' who enjoys being punched by strangers--may have come across as pat and sensationalistic. But Levin is interested in how language shapes and limits reality, and he deftly uses his ear for voice to elaborate on these ideas. He also possesses a logician's dexterity when it comes to plotting, nimbly anchoring his linguistic concerns to surprising story arcs. In 'Scientific American,' a financial trader grows increasingly obsessed with determining the reason behind his bedroom wall oozing gel, and in the title story, a self-described Ukrainian "meathead" sees subtext in everything, but laments his inability to gauge words correctly when it matters: 'Like hot pink? For years I thought it was regular pink that looked sexy on whoever was wearing it.' Despite the encumbering instruction-manual frame of 'How to Play The Guy,' Levin's newest cements his position as a writer with the daring and talent to push the boundaries of short fiction."
Publisher's Weekly

"Hot Pink leaves readers wondering what might be lurking nearby, on the verge of uprooting their own lives."
Chicago Magazine

"Each story in this anticipated follow-up to Levin's megalithic debut The Instructions, has its own cracks-fissures in otherwise recognizable realities that expose the hidden aspects of everyday experience."
Nylon

"From walls that ooze unnameable, unidentifiable gel, through makers of children's dolls designed to mimic the stages of digestive health, to old widowers in retirement looking back over their marriages, Levin manages to find the pathos and humor in living an 'ordinary' existence. Enter his world if you dare!"
The Jewish Times

"Levin has a gift for voice, for creating enticing narrators. Whether it's the elderly, dirty-minded Jewish men of 'The Extra Mile' or the adolescent Italian-American toughs of 'Finch' and the white working-class boys of 'Hot Pink,' these are stories that grab the ear first.”
The LA Times

Each story is so singular and entirely different that it becomes a joy delving into each strange new world.”
Grantland.com

[Levin] writes tough, funny characters who have honest voices and who see beautiful, awful things happen. He’s also good at writing stories that make you lose track of whether they’re deeply sad or very funny.”
On The Media Blog

Levin goes places where most of us wouldn't dare let our mind wander.”
Jewish Book Council

Impossible to put down.”
The Chicagoist

Beautiful writing that is simultaneously fast, gritty, and brutal.”
InDigest

"[Adam Levin] can enter the mind of a character and write exactly what they are thinking."
Portland Book Review

Hot Pink really shines, showcasing the work of an author who understands the heartbreaking potential of our desire to be liked.”
BOMBLOG

Levin experiments with form, digresses within his digressions, mixes registers beautifully, and never lets realism get in the way of a good time.”
Star Tribune