The Blueprint: How the Democrats Won Colorado (and Why Republicans Everywhere Should Care) (Paperback) 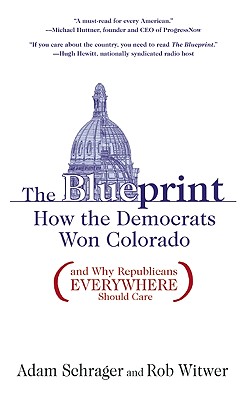 The Blueprint: How the Democrats Won Colorado (and Why Republicans Everywhere Should Care) (Paperback)


On Our Shelves Now
Through the microcosm of Colorado's stunning political transformation, this is an inside look at the rapidly-changing business of campaigns and elections. The techniques pioneered in Colorado have been recognized by both parties and pundits as the future of American politics.
Adam Schrager covers politics for KUSA-TV, the NBC affiliate in Denver, Colorado. In more than 15 years in the business, he has won numerous broadcast journalism accolades, including more than a dozen Emmy awards. He is the author of The Principled Politician: Governor Ralph Carr and the Fight against Japanese American Internment. He teaches an introductory class on broadcast journalism at the University of Denver. Rob Witwer is a former member of the Colorado House of Representatives. He has successfully managed six local campaigns and has served as legal counsel to the Colorado Republican party, the governor of Colorado, and several legislative, congressional, and gubernatorial candidates. Witwer practices law in Denver and lives in Golden with his wife and four sons.

"What caused this stunning reversal [in Colorado]? It wasn't just the vagaries of political fortune; a carefully executed Democratic plan was instrumental in the turnaround. Adam Schrager and Rob Witwer debriefed the architects of the plan and now lay out what they learned in The Blueprint. "Wall Street Journal

"It's been blurbed by everyone from liberals... to conservatives including former Gov. Bill Owens and Hugh Hewitt- this is an even-handed take, not a takedown, and is well worth your time."Gabbur

"Every conservative should read The Blueprint. It is a must-read for anyone who wants to understand how the Left has built its machine."Red State Blog

"Provides fascinating insights into one of the most sustained and coordinated political efforts in recent history."Taegan Goddard's Political Wire

"The Colorado turnaround in 2008 was nothing short of phenomenal: a once rock-solid Republican state went Democratic in a big way. And members of both parties are still scratching their heads over what happened. Adam Schrager and Rob Witwer have dug into the question for their book The Blueprint: How the Democrats Won Colorado and Why Republicans Everywhere Should Care.Political Bookworm Blog by Steven Levingston

This is not a Colorado story about a positive change in American democracy Adam Schrager and Rob Witwer show in this book that winning has become everything and that any state could build a donor-built and donor-funded conglomerate” that can buy and control the state... Whatever hope I had previously has been severely tested by The Blueprint.” Former Governor, Richard D. Lamm

The Blueprint delves into progressive politics and why Democrats across the country are starting to take power, and how Republicans may be at fault for their own loss of power. The Blueprint is a fascinating case study on the shifting nature of politics on the whole of America.”The Midwest Book Review