Over the Rainbow (Hardcover) 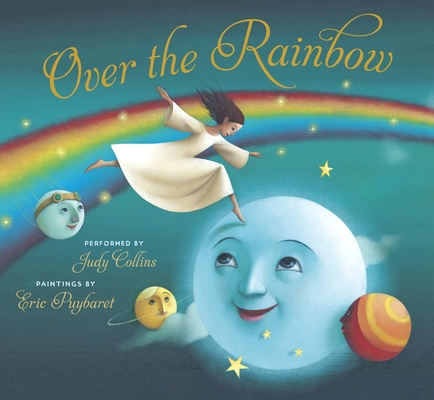 By Judy Collins (Dramatized by), E.Y. Harburg (Lyrics by), Eric Puybaret (Illustrator)
$19.99
Available to Order - Usually Arrives in Our Store in 4 to 7 Days

In this unique offering of a book and CD recorded by Judy Collins, take a magical journey over the rainbow...

This classic song has been transformed into a magnificent picture book and CD set. Breathtaking and magical artwork by Eric Puybaret--who painted the critically-acclaimed illustrations that helped turn PUFF, THE MAGIC DRAGON into a blockbuster bestseller--will carry young readers from a little red farmhouse up over the rainbow, into the sky where bluebirds fly and castles rise high in the clouds, and beyond.

The extraordinary soundtrack for this book is performed by Judy Collins, who has recorded what might be the very best version of "Over the Rainbow" ever sung. The winner of a Grammy Award, Collins' glorious voice is one of the most admired of the 20th and 21st centuries. Her version of this classic will delight and touch the heart of every parent and child who listens. As an added bonus, the enclosed CD also contains two delightful additional songs recorded by Judy Collins: "White Choral Bells" and "I See the Moon."

Composer Harold Arlen and lyricist E.Y. Harburg were two of Broadway and Hollywood’s most popular songwriters. They wrote the songs for the classic film The Wizard of Oz, for which they won an Academy Award®. Judy Collins has thrilled audiences worldwide for nearly five decades with her magnificent voice and thoughtful interpretations. Many of Collins’s albums have been certified platinum and her version of Joni Mitchell’s "Both Sides Now" has been entered into the Grammy Hall of Fame. Her rendition of Stephen Sondheim’s "Send in the Clowns" won Grammy’s Song of the Year in 1975. Judy's film about Antonia Brico, co-directed by Jill Godmillow, was nominated for an Academy Award in 1974. Brico was Judy's classical piano teacher when she was young and was the first woman to conduct major symphonies around the world. In 2000, Judy founded her own record label, Wildflower Records. In 2010 she enjoyed two huge successes with the New York Times best-selling picture books and CD version of OVER THE RAINBOW, illustrated by Eric Puybaret, and her latest album, Paradise, a collection of ten songs, including duets with Stephen Stills and Joan Baez.