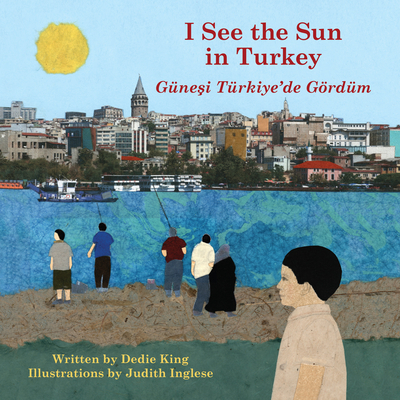 By Dedie King, Judith Inglese (Illustrator), Hilal Sen (Translated by)
Email or call for price. Handling fee may apply.
Special Request - May Not Be Available

A day in the life of a child in Turkey told from the child’s point of view. I See the Sun in Turkey is one of the books in the multiple award-winning I See the Sun in... series of bi-lingual picture books, each focused on one country and one day in the life of one child with a story told from the child’s perspective. I See the Sun in Turkey provides a unique introduction to the culture, family life and language of Turkey in a way that is age-appropriate and sensitive to the current culture and circumstances without becoming political. As with the other books in the series, the author has spent a considerable amount of time in Turkey, not merely as a tourist, but immersed in the environment and living with families who have opened their homes and their hearts to her. Includes facts about the country and a glossary for extended learning. Written in English and translated into Turkish.

Author, Dedie King, a Peace Corps volunteer in Nepal, also taught school there. She travels extensively and spends a considerable amount of time, not as a tourist, but immersed in many cultures, living with families who open their homes to her. She holds a MEd and has taught elementary school and children with learning disabilities. Her interest in writing books about different cultures is to bring awareness to young children of both the sameness and the differences of cultures around the world.

Judith Inglese has been designing and fabricating ceramic tile murals for public environments for more than thirty years. Her commissions include libraries, schools, hospitals and municipal and institutional buildings like the National Zoo in Washington, D.C. Her murals often focus on the play and imagination of children as well as cross-cultural exchange and community. In the I See the Sun books, she combines photography, cut paper and drawing in her collage illustrations. Like her ceramic tile murals, her illustrations are colorful and detailed with strong forms and line work.

"Turkey's political situation is often in the news, but this book focuses mostly on the everyday life of a young child in Istanbul. The English text is in a clear, Roman typeface, with alternating Turkish paragraphs set in italics. The story is bookended by morning and evening calls to prayer, when Mehmet, about 6, remarks on how the light falls on the mosque minarets at each time of day. The family is not shown praying, however, and Mehmet attends a coed secular school. "Some of Mama's friends wear headscarves. Mama doesn't. She says there are many paths to Allah." The day's highlight is a fishing trip with his brother and father. Mehmet notices "a boy my size with his mother." They are not speaking Turkish, and the child "looks sad and hungry." A contemporary issue creeps into the text as Mehmet's father explains "that there are many refugees here in Istanbul." Mehmet generously gives the boy his fishing rod. Later, Mehmet goes roller-skating at the plaza surrounding a neighborhood mosque and watches a soccer game on TV. An afterword for older readers provides some historical facts and explanations about figures mentioned in the text such as Rumi and Atatürk. Adult readers not familiar with Turkish history may wish this had been integrated directly into the text. The collages place rather static human figures assembled from cut paper and with drawn-on details into photographic backgrounds that give a sense of depth and place. Emphasizing daily commonalities, this is a useful book on urban Turkish culture. (afterword, glossary) (Informational picture book. 5-7)" — Vicky Smith, Kirkus

"King’s addition to the bilingual series takes readers on a tour of Turkey through a young boys’ eyes. From waking up to “the echoing morning prayer” of the mosque and seeing the sun, the story follows his typical day (going to a traditional Turkish school, going on an outing with his father, etc.). Focusing on destinations in Istanbul such as the Blue Mosque, Haghia Sophia, and the Galata Bridge, the book provides a slightly touristy but overall true glimpse of Turkey. The use of photos combined with Inglese’s illustrations creates an interesting guidebooklike effect, while keeping consistent with the art style in the other books in the series. The bilingual nature of this picture book makes it better suited for independent or one-on-one reading. The story is well written; however, while the Turkish is quite fluid, the English is choppy. The translation is matched line to line giving it a robotic flow instead of a natural one The most useful parts of this book are the duo-language glossary, which offers a clear definition of some words that cannot be immediately explained in the text, and the “About Istanbul, Turkey” page, which includes facts and cultural information that is easy to understand for the younger crowd. ­VERDICT A fine addition to geography and bilingual collections." — Gilly Yildiz, Eisenhower Public Library, Harwood Heights, IL - School Library Journal