In Wildness Is the Preservation of the World (Hardcover) 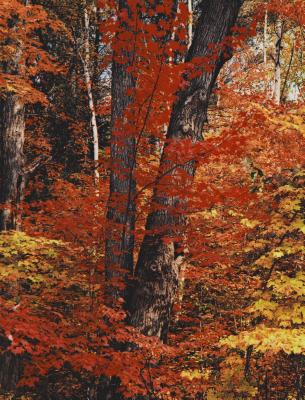 In Wildness Is the Preservation of the World (Hardcover)

Out of Print
A presentation of one of America's leading photographers and artistic pioneers, this is Eliot Porter's pictorial interpretation of the works of Henry Thoreau.
Eliot Porter (1901-1990) was an icon of American photography, most often associated with his outstanding, large-format, color photographs of the natural world. Porter began his education at Harvard University but left the school to devote his life to his photography and to champion the cause of the environment, long before such matters were recognized as important.

In 1962, Porter created in "In Wildnerness Is the Preservation of the World," an immensely popular book combining his evocative, color photographs of New England woods with excerpts from the writings of Henry David Thoreau. The book revolutionized photographic book publishing by setting new standards for design and printing, and proving the commercial viability of fine art photography books. Its success set Porter on a lifelong path of creating similar photographic portraits of a wide variety of ecologically significant places the world over.

Porter's fascination with nature's workings and strong environmentalist ethic never suspended his passion for art. Throughout his life, Porter remained committed to making and exhibiting meticulously rendered dye transfer color prints of his photographs featured in many solo shows, including the American Museum of Natural History, Museum of Modern Art, and the first, one-person show of color photographs presented by the Metropolitan Museum of Art.

Henry David Thoreau (1817-1862) was an American author, poet, philospher, abolitionist, and environmentalist. He is best known for his book "Walden," a reflection upon simple living in natural surroundings, and his essay "Civil Disobedience," an argument for individual resistance to civil government in moral opposition to an unjust state.