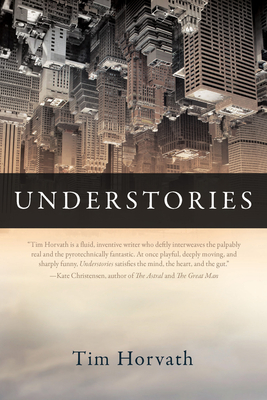 
Available to Order - Usually Arrives in Our Store in 4 to 7 Days
New Hampshire Literary Award Winner
NPR Books Summer Reading Selection "My favorite collection of short stories in recent memory." --NANCY PEARL, NPR Morning Edition "Profound . . . with more to say on the human condition than most full books. . . . A remarkable collection, with pitch-perfect leaps of imagination." --Minneapolis Star Tribune "Horvath doesn't just tell a story, he gives readers a window into the hearts, minds and souls of his characters." --Concord Monitor What if there were a city that consisted only of restaurants? What if Paul Gauguin had gone to Greenland instead of Tahiti? What if there were a field called Umbrology, the study of shadows, where physicists and shadow puppeteers worked side by side? Full of speculative daring though firmly anchored in the tradition of realism, Tim Horvath's stories explore all of this and more-- blending the everyday and the wondrous to contend with age-old themes of loss, identity, imagination, and the search for human connection. Whether making offhand references to Mystery Science Theater, providing a new perspective on Heidegger's philosophy and forays into Nazism, or following the imaginary travels of a library book, Horvath's writing is as entertaining as it is thought provoking. Tim Horvath teaches creative writing at New Hampshire Institute of Art and Boston's Grub Street writing center. He has also worked part-time as a counselor in a psychiatric hospital, primarily with autistic children and adolescents. He lives in New Hampshire with his wife and daughter.

Tim Horvath, a graduate of Vassar College, Teachers College-Columbia University, and the University of New Hampshire, is an associate editor for Camera Obscura Journal and teaches creative writing at New Hampshire Institute of Art and Boston's Grub Street writing center. He has also worked part-time as a counselor in a psychiatric hospital, primarily with autistic children and adolescents. Understories, Horvath's first collection of short fiction, includes the award-winning "Understory," selected by Bill Henderson for the Raymond Carver Short Story Award, and "Circulation," selected by Clark Blaise for the Society for the Study of the Short Story Prize. His stories have also appeared in Conjunctions, Fiction, Alimentum, Puerto del Sol, and elsewhere. He lives in New Hampshire with his wife and daughter.

This collection stand[s] out. There’s plenty of imagination [in Understories] but it’s rooted in recognizable and occasionally irrational emotions, a human quality that makes these stories endure. . . . Below the striking imagery, there’s abundant emotional depth to be found.” Vol. 1 Brooklyn

As any great book, Understories confronts the making of fiction itself, intermittently directly confronting the mechanics of fabrication. . . . A major accomplishment by a major writer . . . full of writing as deeply aware of its antecedents as it is aware of the possibilities within, of, and about narrative.” Big Other

The Understory’ is a terrific reach through history from the pre- and post- Nazi era in Germany up to the present. . . . This is a wonderful story, a first-rate creation by a fine writer.” BILL HENDERSON, president and editor of Pushcart Press, in his judge’s statement for the Raymond Carver Short Story Award