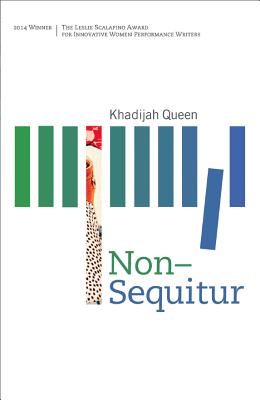 By Khadijah Queen
$15.00
Available to Order - Usually Arrives in Our Store in 4 to 7 Days

Drama. Poetry. Winner of the 2014 Leslie Scalapino Award for Innovative Women Performance Writers. NON- SEQUITUR presents a chorus of figures and objects carrying on apparently unrelated conversations in a shifting landscape of interiors. Of the play, 2013 Leslie Scalapino Award winner Joyelle McSweeney says, "Khadijah Queen's NON-SEQUITUR is the heir apparent to an avant-garde tradition running from the Futurist Sintesi through Lorca's Impossible Theater, through Black Arts to Suzan- Lori Parks. Smart, jagged, and irrepressible, it splits apart the compulsory coherencies of contemporary life to reveal the barbs and aggressions, fantasies and projections that keep society rolling on its dismal, oppressive track. Against such prerogatives, NON-SEQUITUR is an incandescent and welcome act of sabotage."

"In this brief (as in a legal summation) Khadijah Queen revives the political absurdist experimentalism of Adrienne Kennedy, pushing drama to the limits of genre. Objects, ideas, and human body parts are driven to the same ontological plane, precisely the post-human condition in which we find ourselves: teetering at the boundaries of epistemology. NON-SEQUITUR is conceptual writing with concentrated vengeance; it bristles, trembling with a rage barely contained by Queen's laconic rhetoric and pin-point intelligence." Tyrone Williams

"Khadijah Queen's NON-SEQUITUR stages the deleted scenes and invisible screens infusing our social relations. Its evolving chorus explodes every imaginable form of address, every fraction of personal and public history until nothing of the illusion of neutrality remains. Each dissonant encounter invents a forum for another nest of questions. This nexus stings." Eric Baus

"Prodigiously populated theater energized by a rotating cast of intense who dis, who dat and whosoevers: 40% Discount, Morning Stubble, Habitual Justifier, the Charlie Horse Optimist, among others, who if we don't know by name we know them by their catastrophes and desperate hopes. Comedy and calamity spin briskly in the mix, trading lines in duets, trios and quartets. Attention, attention. This is the back of your mind, emerging full blown from a swallowed dream. Here." Erica Hunt

"Khadijah Queen's ingenious NON-SEQUITUR crashes the contemporary moment a glut in bloated celebrity, wild brutality, status quo identity mongering. This cutting and finely attuned play features single-line- slinging speakers, often as object, artifact, consequence (i.e. THE BENT BUSINESS CARD, THE HAND-ME- DOWN PINKING SHEERS, THE BLONDE INSTITUTION) who/that 'can sense your violent thoughts.' Queen's complex manifestations of race, sex, and desire rearrange bodies and material lives where 'beauty behave s] as a whip, ' animating perception and perspective into an ever surprising mix of the theater of the absurd and a febrile cultural unconscious, replete with deleted scenes, characters, and contradiction as illumination, like when THE HAPPY SINGLE reports: 'I'm so ex-cited cuz I... ain't a-bout it, hey heeeeyyyyyy '" Ronaldo V. Wilson.