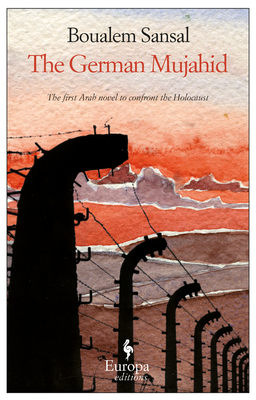 
Title unavailable, please email for information.
Based on a true story and inspired by the work of Primo Levi, The German Mujahid is a heartfelt reflection on guilt and the harsh imperatives of history.

The Schiller brothers, Rachel and Malrich, couldn't be more dissimilar. They were born in a small village in Algeria to a German father and an Algerian mother, and raised by an elderly uncle in one of the toughest ghettos in France. But the similarities end there. Rachel is a model immigrant—hard working, upstanding, law-abiding. Malrich has drifted. Increasingly alienated and angry, a bleak future seems inevitable for him. But when Islamic fundamentalists murder the young men's parents in Algeria the destinites of both brothers are transformed. Rachel discovers the shocking truth about his family and buckles under the weight of the sins of his father, a former SS officer. Now Malrich, the outcast, will have to face that same awful truth alone.

Banned in the author's native Algeria for of the frankness with which it confronts several explosive themes, The German Mujahid is a truly groundbreaking novel. For the first time, an Arab author directly addresses the moral implications of the Shoah. But this richly plotted novel also leaves its author room enough to address other equally controversial issues like Islamic fundamentalism and Algeria's "dirty war" of the early 1990s, for example; or the emergence of grim Muslim ghettos in France's low-income housing projects. In this gripping novel, Boualem Sansal confronts these and other explosive questions with unprecedented sincerity and courage.
Boualem Sansal was born in 1949 in Algeria. Since the publication of his debut novel, Le serment des barbares, which was awarded the Best First Novel Prize in France in 1999, he has been widely considered one of his country's most important contemporary authors. He lives with his wife and two daughters in Algiers.

Praise for The German Mujahid

"The German Mujahid, winner of the RTL-Lire Prize for fiction, is a marvelous, devilishly well-constructed novel."
—L'Express (France)

"With extraordinary eloquence, Sansal condemns both the [Algerian] military and the Islamic fundamentalists; he decries that Algeria crippled by trafficking, religion, bureaucracy, the culture of illegality, of coups, and of clans, career apologists, the glorification of tyrants, the love of flashy materialism, and the passion for rants."
—Lire (France)

"The German Mujahid deals with the fine line between the destructive power wielded by islamic fundamentalism today and the power of another movement that left an indelible mark on history: Nazism."
—Haaretz (Israel)