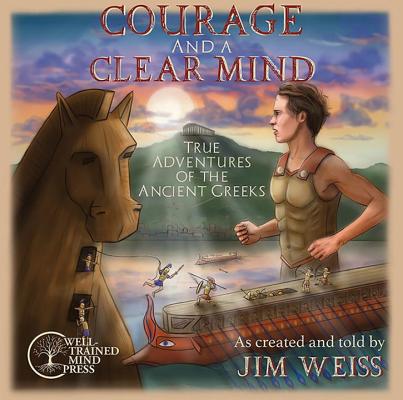 Jim Weiss narrates thrilling episodes from the history and culture of ancient Greece, including the Olympics, the 300 Spartans, and the wisdom of Socrates.

In these vivid, true stories, Jim Weiss takes you back 25 centuries to Golden Age Greece. You’ll charge into land & sea battles to defend the world’s first democracy against a vast, tyrannical empire; attend the original Olympics; hear history’s most famous storyteller, Homer, spin his classic adventure, “The Trojan Horse;” laugh and learn with Socrates, the wisest (and funniest) man in Greece; and meet artists and authors, as well as typical families, in the rival cities of Athens and Sparta. Jim Weiss’s “Courage and a Clear Mind” is sure to inspire your own exploration of the potential that lies within us all.

In 1989, Jim Weiss set out on a mission: to record the greatest stories he knew from world literature and history, and inspire families -- especially young listeners -- with a passionate love of the original classics. In the three decades since then, Jim's narration voice and seemingly numberless character voices have formed foundational entertainment and education for millions of listeners around the world.
Winning hundreds of awards, Jim’s recordings range on the literary side from fairy tales through stories from Shakespeare, Dickens and Conan Doyle, while his history recordings bring to vivid life major historical events and personalities from the ancient world through the twentieth century.
The inspiration for all this began early, with parents and grandparents who told stories and read aloud to him, skills which Jim joyously acquired, and which led him to a degree in Communications and Speech from the University of Wisconsin, Madison. Later, his wife, Randy, earned her own national awards as a teacher and counselor, and their shared passion for learning led to forming their company in 1989, long before the explosion of spoken word recordings made this a "sensible" decision. The recordings began winning listeners and national awards from the first. A few years ago, the Weiss's licensed their recordings and business operations to Well-Trained Mind Press, which has successfully introduced Jim's work into still more markets, while Jim continues to write, record, teach and perform.