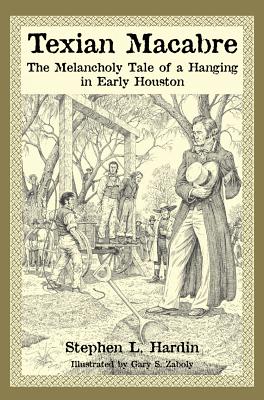 
Available to Order - Usually Arrives in Our Store in 4 to 7 Days
Mandred Wood may have caught a glint off the Bowie knife that sank into his belly—but probably not. On the afternoon of November 11, 1837, he had exchanged "harsh epithets" with David James Jones, a hero of the Texas Revolution. When words failed, Jones closed the argument with his blade. Such affrays were common in Houston, the fledgling capital of the Republic of Texas. This one, however, was singular. Wood was a gentleman and Jones a member of a disruptive gang of vagrants that the upper crust denounced as the "rowdy loafers." Jones went to jail; Wood went to his grave.

In the weeks that followed, the killing resounded throughout the squalid, verminous city that one resident described as the "most miserable place in the world." Stephen L. Hardin's suspenseful and witty narrative reads like a contemporary page-turner, yet all is carefully documented history. He entwines the murder into the story of the sordid city like the strands of a hangman's rope.

It is an astonishing tale peopled by remarkable characters: the one-armed newspaper editor and political candidate who employs the crime to advance his sanctimonious agenda; the Kentucky lawyer who enjoys champagne breakfasts and collecting human skulls; the German immigrant who sees rats gnaw the finger off an infant lying in his cradle; the Alamo widow whose circumstances force her to practice the oldest profession; the sociopathic physician who slaughters an innocent man in a duel; the Methodist minister horrified by the drunken debaucheries of government officials; and the president himself—the Sword of San Jacinto— who during a besotted bacchanal strips to his underwear.

Skillfully conceived and masterfully written, Texian Macabre: A Melancholy Tale of a Hanging in Early Houston will transport readers to a lost time and place.
STEPHEN L. HARDIN has been a historical consultant on several motion pictures including the 2004 production of The Alamo. His book Texian Iliad won the T.R. Fehrenbach Book Award and the Summerfield G. Roberts Award. He is professor of history at McMurry University, Abilene, Texas.