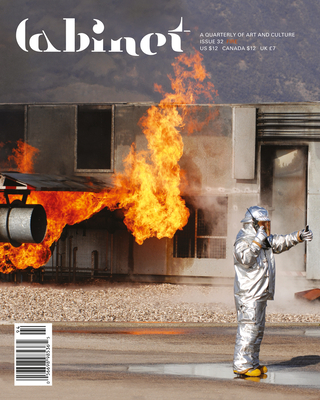 This is book number 32 in the Cabinet series.

One of the four classical elements, capable of both remarkable destructive and generative effect, the heat and light product of chemical reactions that we know as fire is one of the baseline phenomena of human experience. Harnessing and controlling fire is perhaps the single most important achievement of the human animal, and its use--from cooking fires that changed diet and hunting patterns of early man to the forges in which the Industrial Revolution was born--has shaped the development of our history like no other force. Cabinet issue 32, with its special section on Fire, features Thomas van Leeuwen on the history of fire escapes; D. Graham Burnett on the alchemy of spectroscopy; Amanda Miller on the relationship between forgery and fire; an interview with one of the world's foremost aerial firefighters and more. Elsewhere in the issue: an interview with Eyal Sivan on the cultural history of the Jaffa orange; Joshua Foer's timeline of incidents of falling from great heights; and a special portfolio of artworks and writing on the strange flatfish known as the plaice.