I Was a Teenage Angel of Death (Paperback) 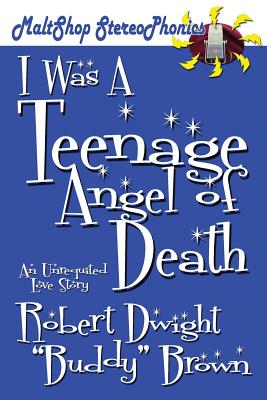 I Was a Teenage Angel of Death (Paperback)

"Teen Tragedy" songs were all the rage in the 1950's. Songs like Jody Reynolds' "Endless Sleep," Mark Dinning's "Teen Angel," Ray Peterson's "Tell Laura I Love Her," and J. Frank Wilson and the Cavaliers' cover of "Last Kiss," not only climbed the charts, but would decades later inspire Robert Dwight "Buddy" Brown to compose a Rock Opera that was "one big Teen Tragedy song."

Taking the archetypes of the cowlicked nerd, the girl-next-door, and the greaser from the wrong side of the tracks, Buddy Brown spins a yarn that weaves from prose into song lyrics and back into prose and into lyrics again, composing the tapestry that is unique: I Was A Teenage Angel of Death, a rock opera without any music. Buddy Brown is hopelessly in unrequited love for Sarah Sue, the girl-next-door, who is smitten with Johnny Angel, a greaser from the wrong of side of the tracks. It is a tale as old as time... well, as old as the 1950's anyway.