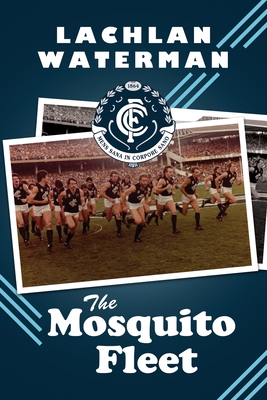 In 2021 and 2022 Carlton celebrates the 40th anniversary of their back-to-back triumphs...

Galvanized by ambitious coaches and bloodthirsty presidents, the Carlton Football Club seemed invincible from 1979 to 1983.

They were entertainers, dubbed "The Mosquito Fleet," considered the best group of small men in the one team at the one time.

Carlton won three VFL premierships in four years and their first ever night title in 1983. Off the field, the Blues unforgettable characters got up to all sorts of mischief and mayhem.

The "Mosquito Fleet" is the lighthearted story of Carlton's greatest era. A team of wild-partying, larger-than-life characters, at times resented by authority, but adored by their legion of fans.

In 2021 and 2022 Carlton celebrates the 40th anniversary of their back-to-back triumphs. When the discussion about dynasties and golden era's is raised, the Carlton teams from 1979 to 1982 rarely enter the conversation.

The Blues won 78% of their matches and three titles in four seasons yet are often overlooked. Their breathtaking style of play and authenticity will long live in the memories of those who saw them play.

"The Mosquito Fleet by Lachlan Waterman, with its rich and detailed descriptions and extracts from interviews, is an exceptional book that lets the reader explore Australian Football at its finest. I would recommend this riveting book to sport lovers, football lovers and non-fiction readers in general." The Literary Titan, 4/4 Star Review"A great yarn and era of classic Australian football...well told and researched by a talented author...cheers Lachlan for a bonza book on the blues..." Craig, Indiebook reviewer (& blues fan )"They were as wild a bunch off the field as the game has seen, but when it came to train and match day, they would die for each other." David Parkin, Carlton coach of the century."A powerful and fast-moving story..." William Cane, International Best- Selling author INTERVIEW WITH LACHLAN WATERMAN:

The Mosquito Fleet takes readers through the golden years of the Carlton Football Club. Why was this an important book for you to write?

Football in the late seventies and early eighties was incredibly tribal. The game was yet to go national, so there were terrific suburban rivalries. In Melbourne, Victoria people lived and breathed the game, it was a religion. Matches were exclusively played on Saturday afternoons. The players were semi-professional, they all worked a normal 9-5 job and were able to relate and connect with the general public. I wanted to reconstruct those magical times again.

What was one of the fondest memories of that time?

Carlton had a team lacking height, just four players over 190cm. The Mosquito Fleet had the most gifted and talented group of small players in the competition that captured the football publics imagination with their breathtaking play. On Sunday nights the ABC had a weekly show The Winners that was must-see TV around Australia. It had the weekly results of matches; The goal of the day, Mark of the day, and Play of the Day, and Carlton seemed to feature nearly every week.