Take Wing to the Baltic: Cruising Notes: UK to Copenhagen via the Netherlands & Germany (Paperback) 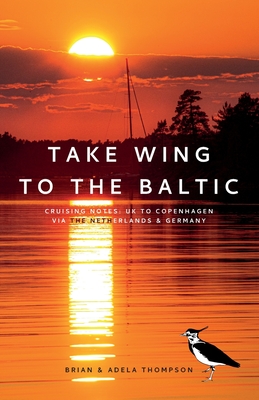 Take Wing to the Baltic: Cruising Notes: UK to Copenhagen via the Netherlands & Germany (Paperback)

They dreamed of escaping the rat race and cruising the world; in their late forties they made it a reality.

In 1987, after their children had grown up and left home, Brian and Adela Thompson threw caution to the wind. Retiring from full-time work, they sold their idyllic seventeenth-century cottage and downsized to a 'Tupperware semi'. In return, the wind took them across canals, rivers and seas, to lakes and lands afar in their 25-foot cruising yacht Kiebitz.

Take Wing to the Baltic follows the couple on the first of their dream voyages-a three-month adventure afloat. Setting sail from the East Coast of England in 1989, Kiebitz (German for 'Lapwing') took the Thompson's through the Netherlands and across the Waddenzee to the Lauwersmeer, onto the North Sea and along to the Kiel Canal, through the Danish archipelago to Copenhagen, back to Friesland via the Eider and Helgoland, and home again through Holland and Belgium.

From man overboard scares to tackling Amsterdam's tricky 'night run', Brian and Adela share the harsh realities of undertaking such an expedition, as well as the wonderful friends they made and places they explored along the way. Told with humour and modesty, their story is both informative and inspiring, and proof that dreams can come true.

The fascinating log won the Cruising Association's Dugon Cup in 1990, awarded to the best log of a cruise in a sailing boat of up to 25 feet LOA.