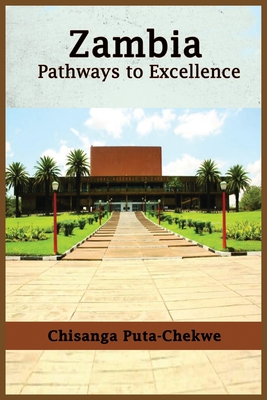 Pathways to Excellence suggests ways in which Zambia could liberate herself from mediocrity and become the world class economy it is meant to be. In addition to sensible prescriptions such as maximizing the efficacy of public spending, and creating conditions that support Zambian entrepreneurship, the author argues that the country's full potential cannot be realized until the ghost of colonialism is exorcised from the national psyche. Ways are suggested as to how Zambians can regain the confidence of their pre-colonial ancestors, and proceed to excellence

Chisanga Puta-Chekwe is uniquely placed to write about Zambia. Born in the copper mining town of Chingola, Chisanga was educated at Kabulonga Boys' School in Lusaka and Sir William Borlase School in Marlow, England. He read law at the Universities of Birmingham and London before proceeding to read Philosophy, Politics and Economics at Oxford University.

As a practising lawyer in Zambia Chisanga represented both corporate and human rights clients opposed to the one party dictatorship that lasted from 1972 to 1991. Chisanga ran the Chekwe Consultancy in Canada from 1989 to 1994 advising clients (including governments) on international development and public policy. He served as Chair and CEO of the Ontario Criminal Injuries Compensation Board from 1994 to 1997 when he became Executive Director of Oxfam Canada.

Chisanga returned to the private sector to serve as Zambia Country Manager for a Canadian mining company in 2008. A year later he was named Ontario's Deputy Minister for Citizenship and Immigration. Chisanga retired from the Ontario government in 2015.

In addition to being president of the Masomo Education Foundation, Chisanga is a senior fellow at Massey College, University of Toronto. He recently co-founded a solar energy company whose first subsidiary is in Zambia'.

Chisanga is the author of the books, An Election to Remember (1996), Getting Zambia to Work (2011), Cobra in the Boat: Michael Sata's Zambia (2017) and Staying Ahead: Due Dilligence in Residence and Citizenship by Investment Programmes (2018).