The Dark Side of Dharma: Meditation, Madness and Other Maladies on the Contemplative Path (Paperback) 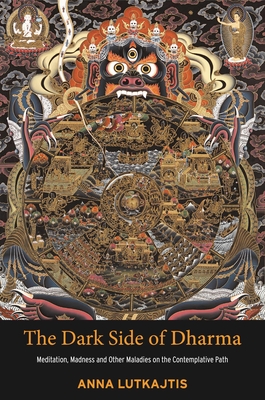 The Dark Side of Dharma: Meditation, Madness and Other Maladies on the Contemplative Path (Paperback)


Available to Order - Usually Arrives in Our Store in 4 to 7 Days
The Dark Side of Dharma explores some of the possible undesirable side effects – also known as ‘adverse effects’ - of meditation and mindfulness. Researcher Anna Lutkajtis investigates why these effects, which are well-known in spiritual and religious traditions, have been ignored in contemporary secular contexts, such as Western psychology.

Lutkajtis’ research reveals that while meditation is commonly portrayed as a practice that is overwhelmingly positive, a growing number of research studies and anecdotal reports suggest that meditation can also have negative effects. Some meditators believe that these adverse effects are a normal part of the contemplative path and a welcome sign of progress. For others, such effects are completely unexpected and can be psychologically harmful.

In religious traditions like Buddhism, difficulties associated with meditation are acknowledged and are usually viewed as milestones on the path to enlightenment or the result of an unbalanced practice. In such traditional contexts, meditation teachers are equipped to deal with adverse effects if and when they arise. However, in the modern West, meditation adverse effects have been overlooked, under- researched, and generally misunderstood.

Given the current popularity of meditation, Lutkajtis argues that it is important to understand why meditation adverse effects have been ignored in contemporary secular settings.
Anna Lutkatis is a postgraduate researcher from Sydney, Australia. Her research focuses on mysticism, psychedelics, and the relationship between mental health, religion and spirituality.