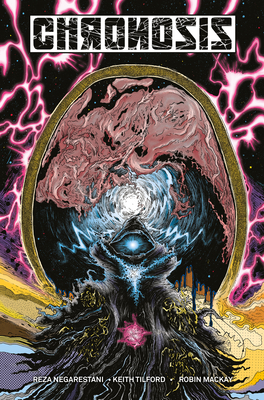 
Title unavailable, please email for information.
A unique fusion of comics culture and philosophical cogitation takes readers on a ride through time, space, and thought.

Approaching the comic medium as a supercollider for achieving maximum abstraction, in Chronosis artist Keith Tilford and philosopher Reza Negarestani create a graphically stunning and conceptually explosive universe in which the worlds of pop culture, modern art, philosophy, science fiction, and theoretical physics crash into one another.

Taking place after the catastrophic advent of the birth of time, Chronosis narrates the story of a sprawling multiverse at the center of which monazzeins, the monks of an esoteric time-cult, attempt to build bridges between the many fragmented tribes and histories of multiple possible worlds. Across a series of dizzying overlapping stories we glimpse worlds where time flows backward, where the universe can be recreated every five minutes, or where rigid facts are washed away by the tides of an infinite ocean of possibility.

A unique fusion of comics culture and philosophical cogitation, this conceptually and visually mind-expanding tale takes the reader on a dizzying rollercoaster ride through time, space, and thought.

This volume contains the entire Chronosis series in full color, along with additional background materials including early sketches, script notes, and alternative covers.

Reza Negarestani is an Iranian philosopher best known for pioneering the genre of "theory-fiction" with his book Cyclonopedia. (Urbanomic/Sequence Press).

Keith Tilford is an artist and theorist living in Brooklyn, New York, whose current art and research projects focus on the intersection of comics and artistic modernism in relation to diagrammatics, worldbuilding, abstraction, and technics.