The Secret Dossier of a Knight Templar of the Sangreal: Revised Edition (Paperback) 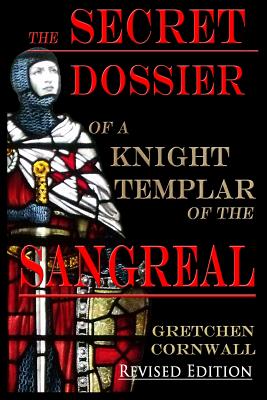 The Secret Dossier of a Knight Templar of the Sangreal: Revised Edition (Paperback)

The Stars of the Magdalene

The wild breadth of information reaches from King Arthur in Cumbria, the marriage of Mary Magdalene & Jesus to new observations on Bernard de Clairvaux. The Man who put swords in the hands of Cistercian monks and created the most enigmatic chivalrous Order of all time - the Knights Templars, modeled on the Knights of Camelot.

The descendants of the Templars thrive in Cumbria, a landscape steeped in the mysteries of the Dragon Tradition found in the lore of Camelot. The ancient lost kingdom of Rheged in Cumbria is the historical setting for the Knights of the Round Table. Lake Windermere is the home of the Lady of the Lake.

Melusine is an early medieval elf maiden of fountains and springs with the ability to transform into a dragon. She is the inspiration for the Lady of the Lake of Arthurian tales. Noble houses of Western Europe counted her as their ancestor. I believe her to be an allusion to Mary Magdalene. Melusine was also the ancestor of the banking family so important to the Italian Renaissance, the Medici.

The Magdalene line of kings called the Merovingians, springs from the French King, Merovee 374 AD to 425 AD, whose dual fathers were King Clodio and also a magical aquatic beast reminiscent of Neptune.

Napoleon had a great interest in the Merovingian dynasty. He wore 300 golden bees on his coronation robe which had been excavated from the tomb of King Childebert II (570-95). Napoleon wove Templar symbolism into art and architecture, aligning himself with Templarism.

The Templar Contact interviewed for the book is a Medici descendant and also of the Man in the Iron Mask, a true account made famous by Alexander Dumas.

The Matrix Map of the World is explored in great detail through the lens of Quantum Physics. It is a portal to understanding the ethos behind the current generation of Knights Templar and a wide angle lens as to their thoughts on the future of humanity.

Included in the Map is the location for Atlantis in the Azores. Jesuit scholar Athanasius concurs, "Site of Atlantis now beneath the sea according to the beliefs of the Egyptians and the description of Plato."

Included is a map by Athanasiusmaller that shows two small islands off the coast of America. Could these two smaller land masses shown, be the remains of Atlantean satellites and solving the riddle of the Bimini Road in Florida? Might we view the lower island as Saint John's of Nova Scotia and the upper island as once having existed off the coast of Florida? Ancient mysteries are explored in detail.

Conversations with the Templar representative are woven into the authors own research. The text is infused with the essence of the language of the angels, Enochian.

The author discovered a 12th century illuminated manuscript and a star chart from 1627 which portrays Mary Magdalene as the new Queen of Heaven. Two new engravings have been added to the final chapter: The Stars of the Magdalene. Filled with codes, the two new plates reveal how this remarkable woman was venerated down through the centuries.

The book is heavily illustrated to ignite your imagination and empower your inner sight. Enjoy the extensive bibliography as a tool to help you navigate your own adventurous journey ahead... for the road goes ever on...