Confessions Of A Heretic: The Sacred And The Profane: Behemoth And Beyond (Paperback) 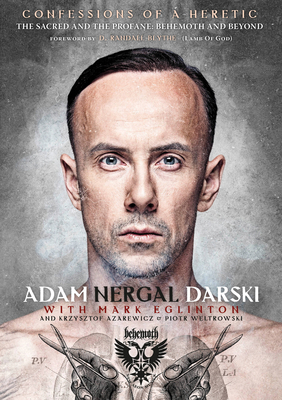 Confessions Of A Heretic: The Sacred And The Profane: Behemoth And Beyond (Paperback)

"Rebellion is a part of youth. Sometimes it's dangerous. Instead of a sword, I hold a guitar in my hands. I'm in the same, rigid world but instead of Molotov cocktails, I've got a computer. It's a much more powerful weapon."

Confessions Of A Heretic is the forthright and erudite memoir of the front man and driving force behind the Polish heavy-metal group Behemoth, currently at the top of their game following the release of their 2014 US Top 40 album The Satanist.

Presented as a series of interrogations by friends and associates, the book reveals a complex man of great contrast--a health-conscious, highly personable intellectual known for his extreme views and even more extreme music--lifting the lid on everything from his clashes with the Polish Catholic church to appearing as a judge on the Polish edition of The Voice to his recent battle with leukemia.

Born in Gdynia in 1977, Adam Nergal Darski is a Polish musician and singer best known as the leader of the international renowned black metal group Behemoth, with whom he has recorded ten studio albums across three decades, the most recent of which is The Satanist. This is his first book.

Mark Eglinton is a bestselling author and ghostwriter. Specialising primarily in memoir and non-fiction, his books include Official Truth: 101 Proof--The Inside Story Of Pantera with bassist Rex Brown, widely acclaimed as one of the most honest music memoirs of recent years.