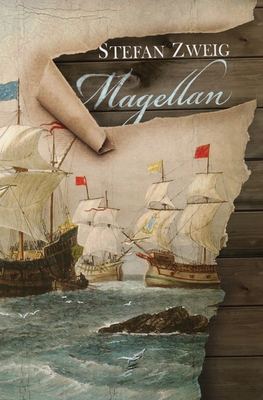 The Portuguese explorer Ferdinand Magellan (1480–1521) is one of the most famous navigators in history – he was the first man to sail from the Atlantic to the Pacific Ocean, and led the first voyage to circumnavigate the globe, although he was killed en route in a battle in the Philippines.
In this biography, Zweig brings to life the Age of Discovery by telling the tale of one of the era’s most daring adventurers. In typically flowing and elegant prose he takes us on a fascinating journey of discovery ourselves.

Stefan Zweig was born in 1881 in Vienna, a member of a wealthy Austrian-Jewish family. He studied in Berlin and Vienna and was first known as a translator and later as a biographer. Zweig travelled widely, living in Salzburg between the wars, and enjoying literary fame. His stories and novellas were collected in 1934. In the same year, with the rise of Nazism, he briefly moved to London, taking British citizenship. After a short period in New York, he settled in Brazil where in 1942 he and his wife were found dead in bed in an apparent double suicide.

“What did Zweig have that brought him the fanatical devotion of millions of readers, the admiration of Herman Hesse, the invitation to give the eulogy at the funeral of Sigmund Freud? To learn that, we would have to have a biography that illuminated all aspects of his work, that read all of his books, and that challenged, rather than accepted, the apparent modesty of his statements about his life and work.” – Benjamin Moser, Bookforum

Zweig’s readability made him one of the most popular writers of the early twentieth century all over the world, with translations into thirty languages. His lives of Mary Stuart and Marie Antoinette were international bestsellers." - Julie Kavanagh, The Economist Intelligent Life

'Zweig’s accumulated historical and cultural studies, whether in essay or monograph form, remain a body of achievement almost too impressive to take in... Full-sized books on Marie-Antoinette, Mary Stuart, and Magellan were international best sellers." - Clive James, Cultural Amnesia

'Stefan Zweig cherished the everyday imperfections and frustrated aspirations of the men and women he analysed with such affection and understanding." - Paul Bailey, Times Literary Supplement

"To read Zweig is to be in the presence of a properly mature writer, for all that his characters are often in the grip of highly inappropriate desires. (...) These are unforgettable stories, beautifully translated. Anthea Bell is a first-rate translator; she brings out the humour as well as the anguish that make Zweig's work so sympathetically acute." – Nicholas Lezard, Guardian

"Touching and delightful. Those adjectives are not meant as faint praise. Zweig may be especially appealing now because rather than being a progenitor of big ideas, he was a serious entertainer, and an ardent and careful observer of habits, foibles, passions and mistakes." — A.O. Scott, The New York Times