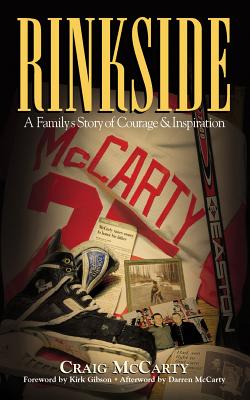 By Craig McCarty, Kirk Gibson (Foreword by), Darren McCarty (Afterword by)
Email or call for price. Handling fee may apply.
Hard to Find

How much should you encourage your child when he or she wants to become a professional athlete? Is it realistic to believe your son can really make it in the NHL? When Craig and Roberta McCarty were faced with that decision, they told Darren to always have a plan and they would stand behind him—whatever it took. What it took was a lot of family sacrifice but what it led to was a two-time Stanley Cup winning career with the Detroit Red Wings. What the family hadn't planned on was the individual struggles both father and son would have to face. After helplessly watching his son battle with alcoholism, Craig had to concern himself with his own health when he was diagnosed with multiple myeloma terminal cancer. After years of disagreement, father and son put the past behind them and vowed to be there for each other through their difficulties. Rinkside is a truly inspirational story of a family struggling to beat the odds and their discovery that a family unit is not disposable, but truly one of the most valuable things in life.

Craig McCarty is the father of professional ice hockey forward Darren McCarty, who plays with the Detroit Red Wings of the National Hockey League and won the Stanley Cup in 1997 and 1998.