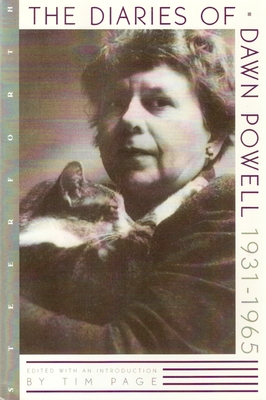 
Available to Order - Usually Arrives in Our Store in 4 to 7 Days
Dawn Powell had a brilliant mind and a keen wit and her humor was never at a finer pitch than in her diaries. And yet her story is a poignant one – a son emotionally and mentally impaired, a household of too much alcohol and never enough money, and an artistic career that, if not a failure, fell far short of the success she craved. All is recorded here – along with working sketches for her novels, and often revealing portraits of her many friends (a literary who’s who of her period) – in her always unique style and without self-delusion.

Powell's remarkable Diaries will stand as one of her finest literary achievements.
When Dawn Powell died in 1965, virtually all her books were out of print. Not a single historical survey of American literature mentioned her, even in passing. And so she slept, seemingly destined to be forgotten – or, to put it more exactly, never to be remembered.

How things have changed! Numerous novels by Dawn Powell are currently available, along with her diaries and short stories. She has joined the Library of America, admitted to the illustrious company of Ralph Waldo Emerson, Henry Adams, Frederick Douglass, and Edith Wharton. She is taught in college and read with delight on vacation. For the contemporary poet and novelist Lisa Zeidner, writing in The New York Times Book Review, Powell “is wittier than Dorothy Parker, dissects the rich better than F. Scott Fitzgerald, is more plaintive than Willa Cather in her evocation of the heartland, and has a more supple control of satirical voice than Evelyn Waugh.” For his part, Gore Vidal offered a simple reason for Powell’s sudden popularity in the early Twentieth Century: “We are catching up to her.”

Dawn Powell was born in Mt. Gilead, Ohio, on November 28, 1896, the second of three daughters. Her father was a traveling salesman, and her mother died a few days after Dawn turned seven. After enduring great cruelty at the hands of her stepmother, Dawn ran away at the age of thirteen and eventually arrived at the home of her maternal aunt, who served hot meals to travelers emerging from the train station across the street. Dawn worked her way through college and made it to New York. There she married a young advertising executive and had one child, a boy who suffered from autism, then an unknown condition.

Powell referred to herself as a “permanent visitor” in her adopted Manhattan and brought to her writing a perspective gained from her upbringing in Middle America. She knew many of the great writers of her time, and Diana Trilling famously said it was Dawn “who really says the funny things for which Dorothy Parker gets credit.” Ernest Hemingway called her his “favorite living writer.” She was one of America’ s great novelists, and yet when she died in 1965 she was buried in an unmarked grave in New York’s Potter’s Field.
"The struggle chronicled in The Diaries of Dawn Powell is as brave and feisty a story as any to be found in the novels that made her Ernest Hemingway’s 'favorite living writer.'" -- James Wilcox, Elle Magazine

"One of the outstanding literary finds of the last quarter-century . . . a book in a thousand." -- New York Times Book Review

"Reads like a mini-book of mini-stories – one compact, perfectly formed narrative followed by another." -- Bill Buford in The New Yorker