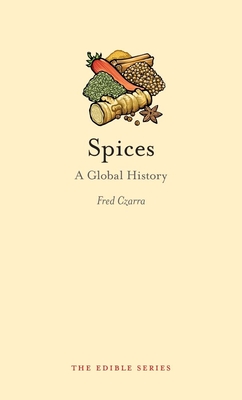 By Fred Czarra
Please email or write store for pricing and availability information.
Hard to Find

The scent of oregano immediately conjures the comforts of Italian food, curry is synonymous with Indian flavor, and the fire of chili peppers ignites the cuisine of Latin America. Spices are often the overlooked essentials that define our greatest eating experiences. In this global history of spices, Fred Czarra tracks the path of these fundamental ingredients from the trade routes of the ancient world to the McCormick’s brand’s contemporary domination of the global spice market.

Focusing on the five premier spices—black pepper, cinnamon, nutmeg, cloves, and chili pepper—while also relating the story of many others along the way, Czarra describes how spices have been used in cooking throughout history and how their spread has influenced regional cuisines around the world. Chili peppers, for example, migrated west from the Americas with European sailors and spread rapidly in the Philippines and then to India and the rest of Asia, where the spice quickly became essential to local cuisines. The chili pepper also traveled west from India to Hungary, where it eventually became the national spice—paprika.

Mixing a wide range of spice fact with fascinating spice fable—such as giant birds building nests of cinnamon—Czarra details how the spice trade opened up the first age of globalization, prompting a cross-cultural exchange of culinary technique and tradition. This savory spice history will enliven any dinner table conversation—and give that meal an unforgettable dash of something extra.

Fred Czarrateaches at St. Mary’s College of Maryland. He has published widely in the field of education.

"This is a voyage of exotic discovery that will tempt all food lovers. You’ll be transported to paradise islands where monstrous birds made their nests from cinnamon branches. Cloves were said to come from a hidden valley and were sold by genies. . . . The exploration for spices was the ancient world’s equivalent of sending a man to the moon, and Spices: A Global History is a riveting read."
— Mostly Food.com

"A pocket-sized gem . . . Czarra's step by step guide to spices explaining the origins of spices, where they are grown and the many and various uses, aside from culinary, to which they are put is riveting."--Asian Affairs

"This highly readable history of spices traces their origins in the ancient world through to the present day. As part of Reaktion Books’ Edible series this will appeal to anyone interested in the history of food . . . The history is engrossing . . . The book is also well illustrated with 58 different images, including 33 in colour. These include maps, paintings and detailed botanical drawings . . . This title and the entire Edible series are highly recommended."–Oxford Vegetarians