Hollow City: The Siege of San Francisco and the Crisis of American Urbanism (Hardcover) 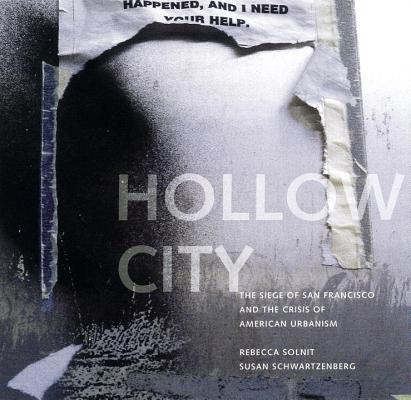 By Rebecca Solnit, Susan Schwartzenberg (Photographer)
$20.00
Warehouse Out of Stock

California’s Bay Area is home to nearly a third of the venture capital and internet businesses in the United States, generating a boom economy and a massive influx of well-paid workers that has transformed the face of San Francisco. Once the great anomaly among American cities, San Francisco is today only the most dramatically affected among the many urban centers experiencing cultural impoverishment as a result of new forms and distributions of wealth.

A collaboration between writer-hiostorian Rebecca Solnit and photographer Susan Schwartzenberg, Hollow City surveys San Francisco’s transformation—skyrocketing residential and commercial rents that are driving out artists, activists, nonprofit organizations and the poor; the homogenization of the city’s architecture, industries and population; the decay of its public life; and the erasure of its sites of civic memory.

Written as a tour of the city’s distinctive characters and locales, Solnit’s text grounds the current evictions in earlier histories of urban renewal and the economic geography of artists, from Haussmann’s impact on the Paris of Baudelaire, to the relationship between the Beats and San Francisco’s African-American community during ‘negro removal’ of the 1950s. She investigates the ways wealth is now clear-cutting the cultural richness of American urban life, erasing space for idealism, dissent, memory and vulnerable populations.

Schwartzenberg’s photo-essays document the profusion of construction and demolition projects in the city, the imperial spaces of dot-com businesses, the proliferation of retail chains, and the rapid disappearance of areas in which artists can live and create. They feature works by more than a dozen San Francisco artists.

Rebecca Solnit is author of, among other books, "Wanderlust, A Book of Migrations, A Field Guide to Getting Lost," the NBCC award-winning "River of Shadows" and "A Paradise Built In Hell." A contributing editor to Harper's, she writes regularly for the "London Review of Books" and the "Los Angeles Times." She lives in San Francisco.

Urban archaeologist and artist Susan Schwartzenberg is the author of "Market Street," a visual study of San Francisco's main artery, as well as photo-essays in several books, including "Reclaiming San Francisco."

“Hollow City, with its writing as lucid as a clear-flowing stream and its persuasive array of images in decisively brilliant design, lays out just how the 80s and 90s put the real life of the city under siege.”—Martha Rosler

“So many of the people who kept American cities alive and creative through dark decades, when capital abandoned the city, have become victims of capital’s recent triumphant return to the city. This beautifully composed and crafted book tells their story. It is a compelling vision of our emerging global culture of displaced persons.”—Marshall Berman

“One day, we all woke up and San Francisco had become a bohemian entertainment park, without bohemians. Those were the golden days of virtual capitalism. Rebecca Solnit and Susan Schwartzenberg help us to understand why this happened. Their book is necessary to understanding our new place in a brand new scary world.”—Guillermo Gomez-Pena

“A place for artists, activists, and working folks: that’s what made San Francisco the great city it is. Or was. The city we love is disappearing almost overnight and turning into just another sector of corporate monoculture. This is a terrific book, a passionate collaboration of word and image that surveys the rich urban culture we are losing.”—Lawrence Ferlinghetti and Nancy J. Peters