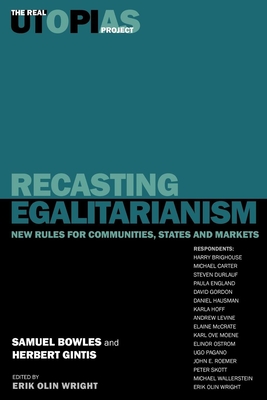 
Available to Order - Usually Arrives in Our Store in 4 to 7 Days
In Recasting Egalitarianism, part of Verso’s Real Utopias series, economists Samuel Bowles and Herbert Gintis diagnose the current malaise of the Left as a result of the obsolescence of its traditional economic models. They propose to rejuvenate the egalitarian project through a strategy of asset-based redistribution, drawing in novel ways on markets, competition, state regulation and community governance. In this major work on economic and social policy, the authors address the twin challenges posed by a globally integrated economy and the key economic roles now played by information, motivation, and other intangibles. They propose an egalitarian redistribution of assets—land, capital, and housing—and argue for the beneficial disciplining effects of competition both in markets and among publicly-funded service providers, pointing out that the injustices commonly associated with markets can be avoided if assets are more equally distributed. The lead essay in the book lays out the underlying logic of this proposal in some detail. This is followed by responses by critics and supporters.
Samuel Bowles is an American economist and Professor Emeritus at the University of Massachusetts, Amherst.

Erik Olin Wright is Vilas Distinguished Professor of Sociology at the University of Wisconsin. He is the author of many books, including Classes, Interrogating Inequality, Class Counts, Deepening Democracy (with Archon Fung), and Envisioning Real Utopias. For more information on Envisioning Real Utopias and the Real Utopias project, and to access book content, please visit <a href="http://realutopias.org/">realutopias.org</a> (site in progress).

John E. Roemer is the Elizabeth S. and A. Varick Professor of Political Science and Economics. He is a Fellow of the Econometric Society, and has been a Fellow of the Guggenheim Foundation and the Russell Sage Foundation.

“Recasting Egalitarianism is an exceptionally stimulating collection of essays ... compulsory reading for everyone concerned with the policies and politics of equality.”—Frank Vandenbrouke, former Vice-Prime Minister of Belgium of leader of the Socialistiche Partij

“This is a timely, original and enormously useful book for rethinking alternatives to the status quo, in Latin America and elsewhere.”—Jorge G. Castaneda, author of Utopia Unarmed: The Latin American Left after the Cold War; and Campanero: The Life and Death of Che Guevara