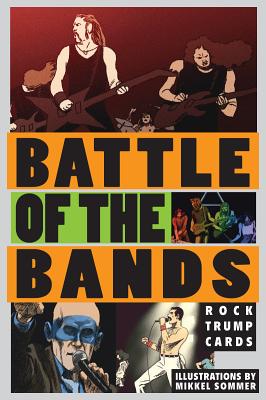 By Stephen Ellcock, Mikkel Sommer
$9.95
On Our Shelves Now

Wallpaper*Who was the most shocking rock band in living history, the Sex Pistols or Black Sabbath? Did Led Zeppelin destroy more hotel rooms than The Who? Was anyone more influential than The Beatles? And who threw more diva strops? This fun trump game rates 32 bands by criteria ranging from Commercial Success, to Appetite for Destruction, to Sex Appeal.

Settle the score on who rules the rock world with these 32 trump cards.

Stephen Ellcock is a London-based writer and editor who has contributed to several publications, including LKP's upcoming Lingo Bingo game.

Mikkel Sommer was born in 1987 and grew up in Copenhagen. He started freelancing in 2009, working in illustration, design for animation and comic books. He lives in Berlin with his wife and daughter.