The Road to Victory: From Pearl Harbor to Okinawa (General Military) (Hardcover) 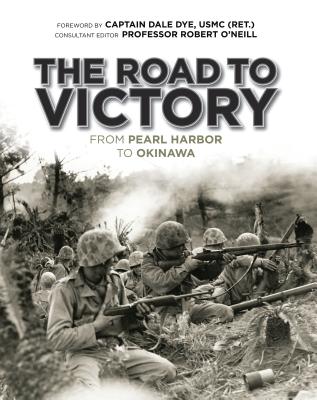 By Dale Dye, Robert O'Neill
Please email or write store for pricing and availability information.
Special Request - May Not Be Available

On December 7, 1941, as the Japanese dived out of the clouds above Pearl Harbor, America's future was fundamentally altered. Ever since the first world conflict, the United States had resisted the temptation to be drawn into wars outside of its borders. But with this one surprise attack America was inevitably thrown into the fray as the Second World War erupted. This new history by military specialists, Osprey Publishing, reveals each of the battles America would fight against Imperial Japan from the naval clashes at Midway and Coral Sea to the desperate, bloody fighting on Iwo Jima and Okinawa. Each chapter reveals the horrors of battle and the grim determination to wrest victory from certain defeat. Using an astonishing collection of wartime imagery and complete with dozen of full-colour maps, this is an invaluable visual guide to the road to victory.

Professor Robert O'Neill, AO D.Phil. (Oxon), Hon D. Litt. (ANU), FASSA, is the Series Editor of the Essential Histories. His wealth of knowledge and expertise shapes the series content and provides up-to-the-minute research and theory. Born in 1936 an Australian citizen, he served in the Australian Army, and has held a number of eminent positions in history circles, including Chichele Professor of the History of War at All Souls College, Oxford, and Chairman of the Board of the Imperial War Museum and the Council of the International Institute for Strategic Studies, London. He is the author of many books including works on the German Army and the Nazi Party, and the Korean and Vietnam wars. Now based in Australia on his retirement from Oxford he is the Director of the Lowy Institute for International Policy and Planning Director of the US Studies Centre at the University of Sydney.

Dale Dye enlisted in the United States Marine Corps in 1964 and served in Vietnam, surviving 31 major combat operations. He emerged from Southeast Asia highly decorated, and rose to the rank of Master Sergeant before he was chosen to attend Officer Candidate School. Dye founded Warriors, Inc, the leading military consultancy to motion pictures and television shortly after retiring from the Marine Corps and his firm has worked on more than fifty movies and TV shows including several Academy Award and Emmy winning productions.