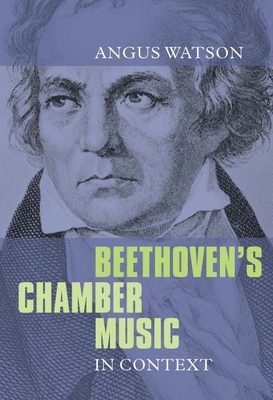 By Angus Watson
$24.95
Available to Order - Usually Arrives in Our Store in 4 to 7 Days

Beethoven's Chamber Music in Context provides professional and amateur musicians, and music lovers generally, with a complete survey of Beethoven's chamber music and the background to each individual work - the loyalty of patrons, musicians and friends on the one hand; increasing deafness and uncertain health on the other. Attention is paid to the influence of such large-scale compositions as the Eroica Symphony and Fidelio on the chamber music of his middle years and the Missa Solemnis and the Ninth Symphony on his late quartets. The author also lays stress on Beethoven's ever-increasing freedom of form - largely a result of his mastery of improvisation and a powerful symbol of the fusion of classical discipline with the subversive spirit of romantic adventure which characterises his mature music. Beethoven's friends were not shy about asking him what his music meant, or what inspired him, and it is clear that he attached the greatest importance to the words he used when describing the character of his compositions. 'The tempo is more like the body, ' he wrote when commending Malzel's invention of the metronome, 'but these indications of character certainly refer to the spirit.' Angus Watson, a violinist and conductor, has been Director of Music at Stowe School, Winchester College and Wells Cathedral School, one of Britain's specialist music schools. From 1984-1989 he was Dean of Music at the newly founded Hong Kong Academy for Performing Arts.