The Irish Art Of Controversy (Paperback) 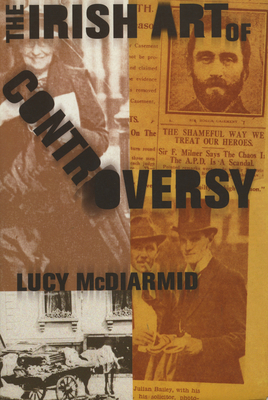 The Irish Art Of Controversy (Paperback)


Email or call for price. Handling fee may apply.
Controversies are high drama: in them people speak lines as colourful and passionate as any recited on stage. In the years before 1916, public battles were fought in Ireland over French paintings, Dublin slum children, and theatrical censorship. Controversy was ‘popular,’ wrote George Moore, especially ‘when accompanied with the breaking of chairs’. In her new book, Lucy McDiarmid gives a lively account of these and other controversies. They offered to everyone direct or vicarious involvement in public life: the question they articulated was not ‘Irish Ireland or English Ireland’ but whose ‘Irish Ireland’ would dominate when independence was finally achieved. The Irish Art of Controversy recovers the histories of ‘the man who died for the language,’ Father O’Hickey, who defied the bishops in his fight for the Irish language; Lady Gregory and Bernard Shaw’s defence of the Abbey Theatre against Dublin Castle; the 1913 ‘Save the Dublin Kiddies’ campaign, in which priests attacked socialists over custody of Catholic children; and the contested Hugh Lane Bequest to Dublin of thirty-nine Impressionist masterpieces. Roger Casement forms the subject of the last chapter, which offers the definitive commentary on the long-lasting controversy over his diaries. In its original treatment of what Yeats called ‘intemperate speech’, The Irish Art of Controversy suggests new ways of thinking about modern Ireland and about controversy’s bluff, bravado and improvisational flair.
Lucy McDiarmid is Professor of English at Villanova University. She has been the Carole and Gordon Segal Visiting Professor of Irish Literature at Northwestern University and Visiting Professor of English at Princeton. A former president of the American Conference for Irish Studies, McDiarmid is also author of Saving Civilization: Yeats, Eliot, and Auden between the Wars and Auden's Apologies for Poetry, and coeditor of High and Low Moderns: Literature and Culture 1889-1939 and Lady Gregory: Selected Writings. She is a fellow of the Dorothy and Lewis B. Cullman Center for Scholars and Writers at the New York Public Library for 2005-2006.