Nazi Gold: The Sensational Story of the World's Greatest Robbery - and the Greatest Criminal Cover-Up (Paperback) 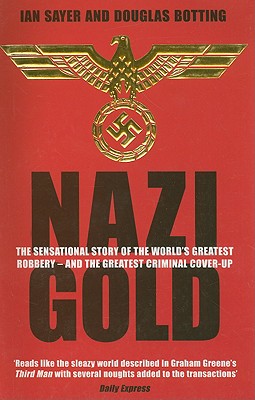 By Ian Sayer, Douglas Botting
$19.95
Warehouse Out of Stock - Available to Backorder

Nazi Gold is the real-life story of the theft of a fabulous treasure—the German national gold and foreign currency reserves, which disappeared in transit following the collapse of the Nazi regime in 1945. The authors' quest led them to a murky, dangerous, post-war world of racketeering, corruption, and gang warfare. Their reporting, matching eyewitness testimony with recently declassified Top Secret documents from the US Archives, lays bare this monumental crime in a narrative which throngs with SS desperadoes, a redheaded queen of crime, American military governors living like kings, and investigators impeded at every step and in fear of their lives. This fully updated edition of Nazi Gold includes startling evidence that throws further light on the crime, including the authors' recent discovery of some of the missing treasure in the Bank of England.