Lessons from the Torah Applied to Today's Living (Paperback) 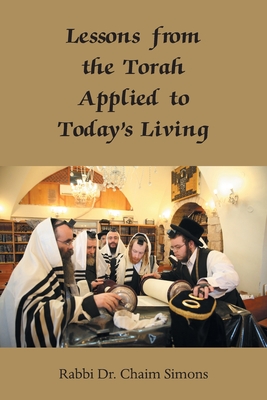 Lessons from the Torah Applied to Today's Living (Paperback)


Available to Order - Usually Arrives in Our Store in 4 to 7 Days
David Ben-Gurion, (who was later the first Prime Minister of the State of Israel), when testifying before the British Royal (Peel) Commission in 1936, whose agenda was to decide on the future of the Land of Israel, declared "The Bible is our Mandate." Indeed, throughout the Bible right back to the time of the Patriarch Abraham, one can see that the Almighty promised the Land of Israel to the Jewish people.This is one of the points I stressed when giving my weekly sermons to my Synagogue over the course of over twenty years. The first section of the Bible is the Torah (Pentateuch), which is the Five Books of Moses. In addition to giving an early history of the Jewish people and the various commandments incumbent on a Jew, the Torah contains many lessons which can be applied to today's living. It was many of these lessons which constituted the contents of my sermons.These include the Jewish rights to the Land of Israel and the strict prohibition on foregoing any of these rights, and furthermore the imperative that the State of Israel be governed in accordance with the principle "The Land of Israel is for the Jewish people and must be governed according to the Torah." Unfortunately, these principles are not implemented in practice, and these points were often stressed in my sermons.Needless to add, there were many other lessons to be learned which I spoke about. One of them was the relationship which should pertain between man and his fellow man. Included in this is taking responsibility for one's actions and not passing the blame on to others. We find a number of occasions in the Torah where this was not done. As an example, Adam blamed Eve who in turn blamed the serpent for eating from the forbidden fruit in the Garden of Eden. A further example is Aaron blaming the Jewish people when he made the Golden Calf, instead of taking the responsibility himself.Hospitality is another important quality which must be extended to all people without distinction. Abraham, already a very old man hurried to give hospitality to people even though he thought that they were idol-worshippers, and furthermore he made the members of his family participate in this hospitality. Kindness to animals is another lesson to be learned from the Torah. Rebekah gave the camels to drink after they came in from a long journey. In fact, it is forbidden to eat a meal until after one has fed one's animals. All this is not limited to physical actions, but also to not hurting the feelings of animals, such as not muzzling an ox when it is working in a field, nor ploughing with an ox and an ass together, since they are of different strengths. One is commanded to repay good by good, and a favour which has been given should never be forgotten however long a time may have passed. An example is the actions of Miriam in endangering her life by guarding Moses in the bulrushes. This was remembered as much as eighty years later.The above are just a few examples of the lessons I gave during the course of my sermons. In addition to my weekly Sabbath sermons, I would give sermons on the various Festivals which occurred throughout the year. I also delivered yearly a special sermon on the Sabbath before the Festival of Passover and on the Sabbath between the Jewish New Year and the Day of Atonement.All these sermons are to be found in this book.