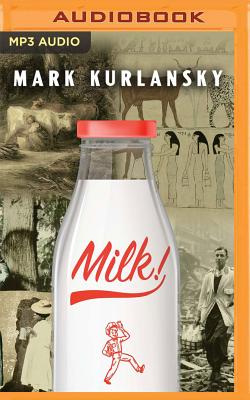 Mark Kurlansky's first global food history since the best-selling Cod and Salt; the fascinating cultural, economic and culinary story of milk and all things dairy - with recipes throughout.

According to the Greek creation myth, we are so much spilt milk; a splatter of the goddess Hera's breast milk became our galaxy, the Milky Way. But while mother's milk may be the essence of nourishment, it is the milk of other mammals that humans have cultivated ever since the domestication of animals more than 10,000 years ago, originally as a source of cheese, yogurt, kefir, and all manner of edible innovations that rendered lactose digestible, and then, when genetic mutation made some of us lactose-tolerant, milk itself.

Before the industrial revolution, it was common for families to keep dairy cows and produce their own milk. But during the 19th century mass production and urbanization made milk safety a leading issue of the day, with milk-borne illnesses a common cause of death. Pasteurization slowly became a legislative matter. And today milk is a test case in the most pressing issues in food politics, from industrial farming and animal rights to GMOs, the locavore movement and advocates for raw milk, who controversially reject pasteurization.

Profoundly intertwined with human civilization, milk has a compelling and a surprisingly global story to tell, and historian Mark Kurlansky is the perfect person to tell it. Tracing the liquid's diverse history from antiquity to the present, he details its curious and crucial role in cultural evolution, religion, nutrition, politics and economics.