The Decadent Society: How We Became the Victims of Our Own Success (Compact Disc) 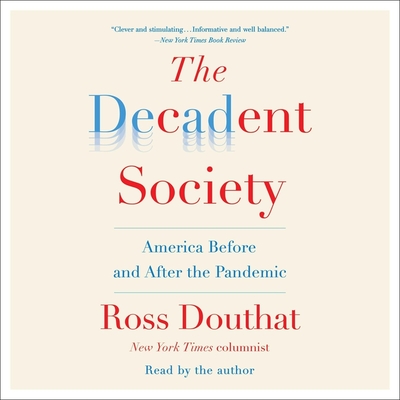 The Decadent Society: How We Became the Victims of Our Own Success (Compact Disc)

By Ross Douthat (Read by)


Title unavailable, please email for information.
From the New York Times columnist and bestselling author of Bad Religion, a powerful portrait of how our age in human history, so superficially turbulent, is actually defined by stagnation, repetition, deadlocks, and decayToday the Western world seems to be in crisis. But beneath our social media frenzy and reality-television politics, the deeper reality is one of drift, repetition, and dead ends. The Decadent Society explains what happens when a rich and powerful society ceases advancing--how the combination of wealth and technological proficiency with economic stagnation, political stalemates, cultural exhaustion, and demographic decline creates a strange kind of "sustainable decadence," a civilizational malaise that could endure for longer than we think. Ranging from the chaos of Trump-era Washington to the gridlock of the European Union, from our empty cradles to our increasingly-lonely pathways through middle and old age, from the lost promise of the Space Age and the early internet to today's earthbound surveillance state, from the recycling of Baby Boomer pop culture to the Brave New World we're making with drugs and virtual reality escapes, Douthat provides an enlightening diagnosis of the modern condition--how we got here, how long our malaise might last, and how, whether in renaissance or catastrophe, our decadence might ultimately end.