Outrageous!: The Story of Section 28 and Britain’s Battle for LGBT Education (Hardcover) 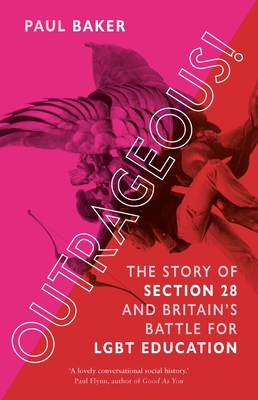 Outrageous!: The Story of Section 28 and Britain’s Battle for LGBT Education (Hardcover)


Available to Order - Usually Arrives in Our Store in 4 to 7 Days
Now in paperback, a personal and impassioned history of the infamous Section 28, the 1988 UK law banning the teaching “of the acceptability of homosexuality.”

On May 23, 1988, Paul Baker sat down with his family to eat cake on his sixteenth birthday while The Six O’Clock News played in the background. But something was not quite right. There was muffled shouting—“Stop Section 28!”—and a scuffle. The papers would announce: “Beeb Man Sits on Lesbian.”

The next day Section 28 passed into UK law, forbidding local authorities from teaching “of the acceptability of homosexuality as a pretended family relationship.” It would send shockwaves through British society: silencing gay pupils and teachers, while galvanizing mass protests and the formation of the LGBTQ+ rights groups OutRage! and Stonewall.

Outrageous! tells its story: the background to the Act, how the press fanned the flames and what politicians said during debates, how protestors fought back to bring about the repeal of the law in the 2000s, and its eventual legacy. Based on detailed research, interviews with key figures—including Ian McKellen, Michael Cashman, and Angela Mason—and personal recollection, Outrageous! is an impassioned, warm, often moving account of unthinkable prejudice enshrined within the law and of the power of community to overcome it.
Paul Baker is professor of English language at Lancaster University. His books include American and British English; with Jo Stanley, Hello Sailor!; and Fabulosa! The Story of Polari, Britain’s Secret Gay Language, the last also published by Reaktion Books.

"Lucid, clear-eyed, warmly personable, and peppered with deliciously wry commentary, it is a detailed, incisive background to the Act and the ideological and party politics from which it germinated, revealing how the press fanned the flames, what precisely politicians said during debates, and how protestors fought back to bring about the repeal of the law in the 2000s. . . . Fascinating, engaging, inspiring."
— Attitude

"As Baker sets out in this vivid look at the legislation and its effects, Section 28 represented 'the culmination of the moral panic around homosexuality that took place over the 1980s.' He sets this panic into its broader historical context, charting the long-burning cultural and political embers ignited when a London school stocked Jenny Lives with Eric and Martin. . . . Baker movingly recounts the more pernicious ways in which it affected the lives of gay people. . . . Baker's chatty, tart tone and personal asides serve to throw the heady extremes of a not-so-distant era into even sharper relief."
— BBC History

"Peppered with wry asides and anecdotes, this is a profile of Britain not so long ago—and of the people who fought back."
— History Revealed

"Outrageous! tells the history of this legislation, interwoven with anecdotes from the author’s own adolescence. It balances the fraught subject matter with humor, particularly in its exploration of the inventive protests Section 28 inspired. This included a group of lesbian protestors who abseiled into the House of Lords on a clothesline as the legislation was being debated; and two years later, when Princess Diana’s speech at a family conference was invaded by five protestors holding placards that said 'Lesbian mothers aren’t pretending.'"
— Huck Magazine

"Entertaining, informative and occasionally laugh-out-loud funny, this history of how Margaret Thatcher’s Section 28 was eventually defeated is also a timely reminder that the old demons of bigotry and exclusion are never far away."
— Scotsman

“I loved Baker's previous book, Fabulosa!. Now he has written this engaging history of Section 28, the act that forbade local authorities from teaching ‘the acceptability of homosexuality as a pretend family relationship.’ Interweaving elements of memoir, it charts how the press fanned the flames around the act, and how protestors fought to bring about the repeal of the law in the 2000s.”
— The Bookseller

"As anyone familiar with Baker's fantastically camp Fabulosa! would expect, his new book, in spite of its bleak subject matter, is more uproarious than self-pitying. . . . A strength of Baker's book is the clear outline of the history of Section 28 and the context in which it arose. . . . Baker's style is ultra-accessible."
— Literary Review

"This popular history is a lucid and at times highly personal account of the rise and fall of Section 28 . . . a witty, accessible and necessary book."
— New Humanist

“An important and fascinating deep dive into one of the most damaging pieces of legislation in modern history.”
— Matthew Todd, author of “Straight Jacket” and “Pride”

“A surprising, smart, funny, and beautifully written book. Equal parts memoir and cultural history, it tells a detailed and deeply personal story of grassroots LGBT activism and everyday queer life in the United Kingdom over the past thirty years.”
— Jason Baumann, editor of “The Stonewall Reader”

“Blowing the lid off a circus of sanctimony with flair, enormous heart, and an eye for the absurd, this indispensable history reads like a madcap caper—reaffirming Baker as an expert malarkey decoder, hope detector amid calamity rubble, and dab hand at the queer deep dive.”
— Jeremy Atherton Lin, author of “Gay Bar"

“The entirely pleasing thought that Outrageous! will be stocked in school libraries is a satisfying slap in the face to the battle-bus of bigots who thought Section 28 was a good idea in the first place. . . . A lovely conversational social history.”
— Paul Flynn, author of “Good As You”

"Baker tells the complete story of the legislation from its origins to its eventual repeal and why the fight still isn’t over. . .. Outrageous! is a book I would highly recommend to anyone wanting to fight for civil liberties because it shows how easily they can be taken away under the guise of 'protecting children.' It frequently makes for uncomfortable reading, but this at least is a story with a happy ending—something we can only help is the case for more marginalized groups in the future."
— GeekMom