Dreams of Leaving and Remaining: Fragments of a Nation (Paperback) 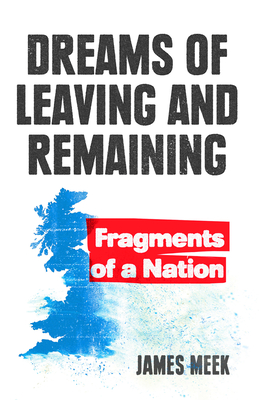 Dreams of Leaving and Remaining: Fragments of a Nation (Paperback)


Title unavailable, please email for information.
The anatomy of Britain on the edge of Brexit, by Orwell Prize winning journalist

Since Britain’s 2016 referendum on EU membership, the nation has been profoundly split: one side fantasizing that the referendum will never be acted upon, the other entrenched in questionable assumptions about reclaimed sovereignty and independence. Underlying the cleavage are primal myths, deeper histories, and political folk-legends. James Meek, “the George Orwell of our times,” goes in search of the stories and consequences arising out of a nation’s alienation from itself.

In Dreams of Leaving and Remaining, Meek meets farmers and fishermen intent on exiting the EU despite the loss of protections they will incur. He reports on a Cadbury’s factory shut down and moved to Poland in the name of free market economics, exploring the impact on the local community left behind. He charts how the NHS is coping with the twin burdens of austerity and an aging population.

Dreams of Leaving and Remaining is urgent reporting from one of Britain’s finest journalists. James Meek asks what we can recover from the debris of an old nation as we head towards new horizons, and what we must leave behind. There are no easy answers, and what he creates instead is a masterly portrait of an anxious, troubled nation.

James Meek is a Contributing Editor of the London Review of Books. He is the author of six novels, including The People’s Act of Love, which was longlisted for the Booker Prize and won the Ondaatje Prize; We Are Now Beginning Our Descent, which won the 2008 Le Prince Maurice Prize; and The Heart Broke In, which was shortlisted for the 2012 Costa Prize. His previous non-fiction work, Private Island, won the 2016 Orwell Prize. In 2004 he was named Foreign Correspondent of the Year by the British Press Awards.


“Meek listens hard … His reportage … demonstrate[s] a sensibility and empathy that are his wont.”
—Financial Times

“A beautiful collection by a renowned essayist.”
—Stephen Bush, Guardian

“Meek is brilliant at focusing on a particular case to tell a bigger story.”
—Labour Briefing

“[Meek] explores the slow-moving processes behind the sudden shock of the Brexit vote by getting out and about in Britain, to look beyond London at the competing ideals that led to this culture clash – cosmopolitanism and urbane liberalism against a more traditional yearning for British sovereignty, its mythology and nostalgia.”
—Dan Hancox, National

“Clear-headed … Meek has a canny ability to provide plausiable explanations for the motivations of many Leave voters.”
—Peace News