Economics for the Many (Paperback) 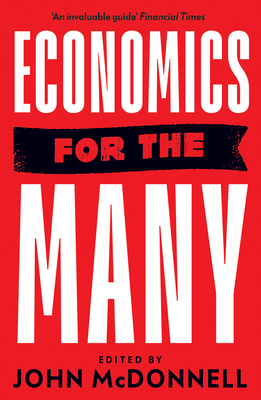 Economics for the Many (Paperback)


Title unavailable, please email for information.
Our economy is rigged in favour of a wealthy elite. We need a new approach: an economics for the many.

Big challenges lie ahead for our society: the rise of automation and the threat of catastrophic climate change. But so, too, do the huge possibilities presented by new technology and better ways of organising our economy in the wake of neoliberalism’s failure. With the election of Jeremy Corbyn as Labour leader, and the extraordinary turnaround in Labour’s fortunes in the 2017 election, we have a real opportunity to build an economy in Britain that is radically fairer, radically more democratic, and radically more sustainable. But we need the right ideas and strategies if we’re going to get there.

Economics for the Many, edited and with an introduction by Shadow Chancellor of the Exchequer John McDonnell, features contributions from the participants in his New Economics conferences, including Barry Gardiner, Ann Pettifor, Prem Sikka, and Guy Standing. It covers topics from housing, public ownership, and fairer international trading systems to industrial policy for the twenty-first century and how to tackle tax avoidance and regional imbalances. Together, the essays in this volume lay out a vision for a new economics, one that works for the many, not the few.

John McDonnell has been the Shadow Chancellor of the Exchequer under Jeremy Corbyn’s leadership since 2015. He has been the Member of Parliament for Hayes and Harlington since the 1997 general election.