We Built the Wall: How the US Keeps Out Asylum Seekers from Mexico, Central America and Beyond (Hardcover) 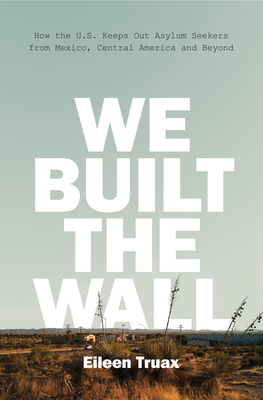 We Built the Wall: How the US Keeps Out Asylum Seekers from Mexico, Central America and Beyond (Hardcover)


Title unavailable, please email for information.
A Mexican-American lawyer exposes corruption in the US asylum procedure and despotism in the Mexican government

From a storefront law office in the US border city of El Paso, Texas, one man set out to tear down the great wall of indifference raised between the US and Mexico. Carlos Spector has filed hundreds of political asylum cases on behalf of human rights defenders, journalists, and political dissidents. Though his legal activism has only inched the process forward—98 percent of refugees from Mexico are still denied asylum—his myriad legal cases and the resultant media fallout has increasingly put US immigration policy, the corrupt state of Mexico, and the political basis of immigration, asylum, and deportation decisions on the spot.

We Built the Wall is an immersive, engrossing look at the new front in the immigration wars. It follows the gripping stories of people like Saúl Reyes, forced to flee his home after a drug cartel murdered several members of his family, and Delmy Calderón, a forty-two-year-old woman leading an eight-woman hunger strike in an El Paso detention center. Truax tracks the heart-wrenching trials of refugees like Yamil, the husband and father who chose a prison cell over deportation to Mexico, and Rocío Hernández, a nineteen-year-old who spent nearly her entire life in Texas and is now forced to live in a city where narcotraffickers operate with absolute impunity.

Originally from Mexico, Eileen Truax is a journalist and immigrant currently living in Los Angeles. She is the author of Dreamers: An Immigrant Generation’s Fight For Their American Dream.

“Eileen Truax has given us an evocative and human portrait of the so-called immigration crisis, bringing together gripping firsthand narratives of refugees with an incisive analysis of America’s broken asylum policy. With attention to lives that have been put in jeopardy by Mexican and American governments alike, We Built the Wall is the book we need in this time of rising nationalisms—a must-read clarion call for empathy across borders in the age of Trump.”
—Ali Noorani, Executive Director, National Immigration Forum, and the author of There Goes the Neighborhood: How Communities Overcome Prejudice and Meet the Challenge of American Immigration

“We Built the Wall combines the flair of a novel and the depth of  the best investigative journalism with a passionate commitment to human rights to take readers into the heart of today’s immigration crisis. Truax highlights the voices of people who are fighting for justice on both sides of the border to shed light on the systems that have led to a deeply transnational human rights crisis. Immigration, she makes clear, is the result, not the cause, of this crisis.”
—Aviva Chomsky, author of Undocumented: How Immigration Became Illegal and “They Take Our Jobs!”: And 20 Other Myths About Immigration

“A lucid account of US asylum policy, both during the Cold War, when it was granted overwhelmingly to people leaving the Soviet Union, Cuba and Vietnam, but withheld from people brutalized by Washington’s allies—in Guatemala, El Salvador, Haiti—and now in the age of deportation, when Mexicans and Central Americans heading north, including children in fear for their lives, find it almost impossible to obtain refugee status.”
—Jeremy Harding, Contributing Editor at The London Review of Books and author of Border Vigils: Keeping Migrants out of the Rich World