The Hidden Half: The Unseen Forces that Influence Everything (Paperback) 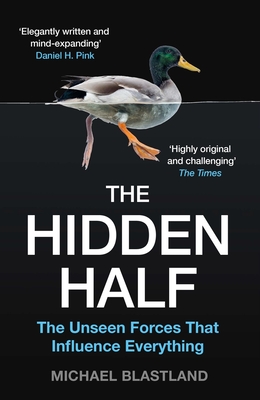 The Hidden Half: The Unseen Forces that Influence Everything (Paperback)


Available to Order - Usually Arrives in Our Store in 4 to 7 Days
Why does one smoker die of lung cancer but another live to 100? The answer is "The Hidden Half"—those random, unknowable variables that mess up our attempts to comprehend the world. We humans are very clever creatures—but we're idiots about how clever we really are. This entertaining and ingenious book reveals how in our quest to make the world more understandable, we lose sight of how unexplainable it often is. The result—from GDP figures to medicine—is that experts know a lot less than they think. Filled with compelling stories from economics, genetics, business, and science, The Hidden Half is a warning that an explanation which works in one arena may not work in another. Entertaining and provocative, it will change how you view the world.
Michael Blastland is a writer and broadcaster. He is the author of The Numbers Game: The Commonsense Guide to Understanding Numbers in the News, in Politics, and in Life, and the coauthor of The Norm Chronicles.
"Elegantly written and mind-expanding . . . will enthrall you with its storytelling while educating you with its scientific depth." —Daniel H. Pink, author, Drive

"Fascinating and provocative. Blastland is one of the most original thinkers around." —Tim Harford, author, The Undercover Economist

"Skeptics will be sure of even less after reading Blastland's book–and that's a step in the right direction." —Kirkus Reviews

"Blastland would like us to embrace ‘how ingeniously the world creates difference,’ and to treat such abstractions as a potentially positive force in our understanding of science, economics, policymaking, and business. We’d be wise to listen." —Foreword Reviews

"This excellent work makes a convincing appeal for intellectual humility in the face of the unknowable." —Publishers Weekly