The Mermaid Atlas: Merfolk of the World (Hardcover) 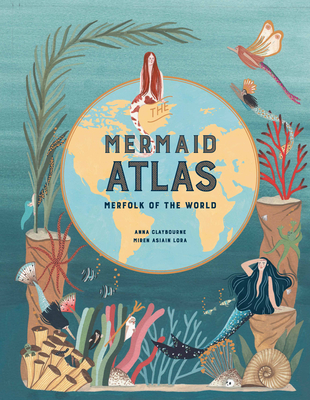 The Mermaid Atlas: Merfolk of the World (Hardcover)


Available to Order - Usually Arrives in Our Store in 4 to 7 Days
The Mermaid Atlas will be your ultimate companion in discovering all your merfolk facts!

All over the world, wherever there's water, there are stories, legends and eyewitness accounts of mermaids. These magical, mesmerizing people of the deep have been well known for thousands of years, and almost every country and culture has a tale to tell about them. People have written, sung and passed on rumours about mermaids since ancient times, and often reported their own mermaid encounters, too.

Do you know the facts and stories surrounding the magical and, often elusive, world of mermaids? This gorgeously illustrated new book includes everything you wanted to know about these mysterious and captivating creatures. Discover their secrets in this beautiful compendium, written by children's author Anna Claybourne and illustrated throughout by award-winning Spanish illustrator Miren Asiain Lora.

The colorful spreads will take you on an around-the-world journey, starting in Europe and the warm Mediterranean to the icy Baltic, as well as through countless isles, lakes and waterfalls, continuing to Africa with its immense lakes, cave pools and swampy deltas. Asia is the next stop with its thousands of islands, beaches, rivers and lakes while Oceania, surrounded by the Pacific Ocean with its scattered islands, seems to be the perfect environment for these mysterious creatures. The journey ends with North and South America, where there are sightings of water spirits and fish-tailed ocean goddesses throughout the whole continent, home to the freezing Arctic, the tropical Caribbean as well as the world's largest jungle.

The Mermaid Atlas will introduce you to the merfolk of the world, whether it's the beautiful Selkies of the Scottish seas, the wily Iara of Brazil who love to outwit travelers or the fearful Ningyo of Japan who can give you eternal life.
Anna Claybourne is a children's author who has written non-fiction books on a wide variety of topics and has retold several myths and legends.